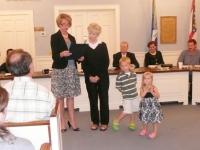 Mayor Debbie Sutherland reads a resolution honoring 29 years of service by retiring School Guard Irene Burkhardt
Irene Burkhardt retired this year after spending 29 years as a School Guard for the city of Bay Village. Irene started in 1980 and spent ten years as a backup guard before becoming the regular guard at the corner of Normandy Road and Douglas Drive. She was honored with a resolution during the City Council meeting on September 21st.
Read More on Bay Village