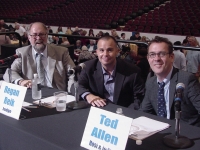 Close to 1,000 foodies from all over Cleveland converged on Quicken Loans Arena on Sept. 10 for the 2011 St. John Medical Center Top Chef Competition.

This was the third year of this event, and it brought four more of Cleveland’s leading chefs to duel it out for the title of Top Chef. Competing were Chef Michael Nowak of Bar Cento in Ohio City, Chef Rob Records of Johnny’s Downtown, Chef Sarah Sherapita of Luxe in Cleveland's Gordon Square District and Chef Jonathan Guest of Little Italy's Washington Place Bistro. All of the proceeds from the fundraiser went to the St. John Medical Center’s Women and Children Services.

As guests arrived, cocktails and light appetizers were served. Guests could also peruse and bid on the dozens of silent auction items, including electronics, spa packages and $200 gift certificates for each chef’s restaurant.

A video montage of each chef’s restaurant was featured on screens throughout the arena. There were also roving cameramen showing the action going on in each chef’s prep kitchen, along with the evening's guests being interviewed by Master of Ceremonies Ahmad Crump, the voice of the Cleveland Cavaliers.

People stood anxiously in line at each chef’s station as they served their appetizers and then entrees. It was fun listening in as people they gave their impression to friends about each selection they were trying. Toward the end of both courses, the chefs individually presented their dishes to the judges. They described in detail the dishes they had prepared. Then they were asked to give more details on how items were prepared, ingredients, and why they chose that dish for the evening's competition.

The task of choosing which of the chefs could tempt the pallet and be honored as Top Chef was left to a distinguished panel of judges: guest host Ted Allen of the Food Network; Joe Crea, food and restaurant editor for The Plain Dealer; and Pier W's chef Regan Reik, winner of last year's Top Chef competition.

There was also a People’s Choice Award to be handed out for the crowd's favorite chef.

As the crowd awaited the judges' decision, we were tempted with dessert. Pier W, LaBella Cupcakes, Cleveland Cupcake Co., Momocho, Fragapane Bakery, Soho and Great Scott’s Bakery provided a wonderful array of sweet treats that finished off the food service for the evening.

Having attended this event before, I was again truly impressed with each chef’s culinary expertise and originality of their preparations. This made choosing a People’s Choice difficult and the judging for Top Chef equally hard.

A special round of applause goes out to Kathy Bacha and Patrick Garmone, co-chairs of the St. John Medical Center Top Chef Competition, and their staff for putting on yet another wonderful event to benefit the Women’s and Children’s Services.

Take a bow, everyone.