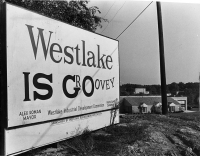 This billboard, with its misspelling of "groovy," was placed on Detroit Road and Sharon Drive in 1970 to attract businesses to Westlake. Photo courtesy Westlake Porter Public Library.

The farming culture that had dominated Westlake’s past was fading in the face of growth and development. By the late 1980s, only one major family farm operation remained, owned by the Juergemeier brothers at the southwest corner of Detroit and Crocker roads. That land is now occupied by the Promenade and Crocker Park.

In 1980, nearly 4,700 acres of the city’s total 10,126 acres of land was still vacant. In the four-year period from 1985 to 1988, seventeen single-family subdivisions were taking shape, containing nearly 800 homes. Several apartment buildings were also under construction during this decade, especially on Detroit Road west of Cahoon Road.

In 1980, land in the industrial area was selling for $30,000 to $50,000 an acre. With the availability of land within close proximity to highways like I-90, Westlake became a popular place to locate. Corporations began to move in and Fortune 500 companies moved their regional headquarters to Westlake. In 1982, Union Carbide selected the Detroit Road site for its $25 million Eveready Battery lab and technical center, creating 400 jobs in the city.

Commercial building began in the late 70s with Westlake’s first office building, built by the King James Group, erected in 1977. Commercial development continued steadily into the 1980s and today.