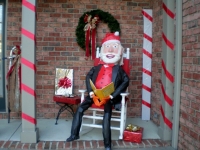 My research into my family history shows that all of my great-grandparents came to America from Germany between 1840 and 1866.

No doubt, as with all emigrants, they brought certain home country traditions with them. However, by the time my immediate family was formed and I was being raised along with an older brother and younger sister three generations later in the 1940s, all but two German or European practices were long gone. One of these was pork and sauerkraut on New Year’s Day so the New Year would be a good one, and another was St. Nicholas Day (der Nikolaustag).

St. Nicholas Day, December 6, this saint’s Feast Day in the Roman Catholic Church, was celebrated in our house by hanging socks from the mantle the evening of December 5 (we used our father’s black calf-length socks) so that when we woke the next morning we would find them filled with fruit and candy.

I would later learn that this nice Christmas season custom can be traced back to some Catholic traditions in southern Germany. There, historically Saint Nicholas (Sankt Nikolaus) is a bishop with a long white beard. Houses were cleaned and children would clean and polish their shoes to prepare for the saint’s visit on December 6.

On that day’s eve, the children would put letters to the saint along with carrots for the saint’s horse or donkey on a plate or even in their shoes. These were left in the house where they could be easily seen with the hope that they would find various good things waiting for them the next morning.

If the children have been good, the saint will fill their plates, shoes or boots with fruits, nuts and candies. If not good, they may get only potatoes, coal or twigs. In some traditions, December 6 was also the day to receive gifts – not on Christmas, which was reserved for Christ.

I’m happy to report that while I may have deserved a lump of coal or a twig at times, that I always found good stuff in my (Dad’s) stocking, as did my brother (who should have been more worried than me) and sister (always deserving). And yes, we also hung Christmas Stockings on Christmas Eve, too.

I write this only to share a nice memory and not to encourage another reason for a shopping spree with a Black Monday or Tuesday. In fact this may be the only “holiday” left that has yet to be tainted by excess commercialism – let’s keep it that way.

May you all have a Happy and Blessed Holiday Season!