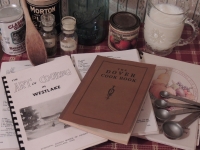 A collection of community cookbooks from years past on display at the Clague House Museum.

Today if I want an easy Crock Pot recipe, I simply check the social media site Pinterest or do a Google search. A few clicks and I can find just the perfect beef stew recipe. The internet puts any recipe virtually at my fingertips. This time of year prompts many of us to reach into our collection of family favorite recipes to prepare for a special holiday meal.

Walk back in time with me as we discover the "community cookbook." Most community cookbooks were and continue to be sold to raise funds for various projects. Maria J. Moss is credited with creating the first charity cookbook. It was sold to help cover medical expenses for the care of Civil War soldiers.

That first book was quickly copied by other groups and organizations. During the time period of 1864-1922, approximately 300 different types were sold. Incidentally, Maria's cookbook can be downloaded from the internet today, as well as many others that are in the public domain.

The idea of collecting recipes from a particular civic group, organization and especially a church was not only extremely popular but also in many instances profitable for them. How many of us own at least a few of these types of cookbooks? I can boast of at least three of these such cookbooks in my collection, including one assembled by a Dover Congregational Church Sunday School class in 1916. It is said to have been printed in Cleveland and then brought via the Interurban Railroad back to Dover. The cookbooks were then loaded onto a sled and brought back to the church. It was republished by the Westlake Historical Society in the 1970s.

This 1916 cookbook even includes a Thanksgiving menu provided by Mrs. G.C. Lathrop. These cookbooks give you an insight into the meals that were prepared by all those who shared their recipes. You can look at each recipe contributor and oftentimes it will read as a who's who of the community. The Westlake Historical Society is always in search of these special cookbooks. Maybe your church or group put one of these books together, or maybe you have extra books that you might consider donating to our collection. If you would, please contact the society at westlakehistory@yahoo.com or 440-808-1961.