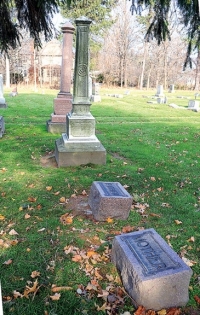 [Final article in a series on the history of homes in Dover – now Westlake and Bay Village – and the Westlake Historical Society's century-home plaquing program.]

The story of the Sheldon Johnson and John W. Hawkins families has come to light during the research for the plaquing of a century home at 2650 Clague Rd. in Westlake. A goal of the program is discovering the previous owners of a home and linking their stories with that of the house. The book “Maple Ridge Cemetery, Westlake, Cuyahoga County, Ohio: A History of Its People and Families” by Jeanne B. Workman and Jayne A. Broestl, published in 2003 by the Cuyahoga West Chapter, OGS, has information about these two related families.

Sheldon Johnson in 1866 died at age 81. He and his wife, Martha, are buried in Lot 7 of Maple Ridge Cemetery, owned by John Hawkins, Sheldon's grandson-in-law. The same cemetery plot also holds the remains of John, his first wife Vannie, his second wife Katherine and three infant children.

The Maple Ridge book states that John Hawkins was born between 1838 and 1840 in Vermont, the youngest of 13 children. His father was born in England, his mother in Ireland. A biographical sketch of his son, Sheldon Johnson Hawkins, says that John’s father died in the Mexican War when John was about six years old. Exactly when John came to Ohio is not clear, but he married Vannie about 1860 in Ohio and served during the Civil War in 1864.

Vannie Hawkins was the granddaughter of Sheldon Johnson. She was the mother of four children, including two who died in infancy and are buried with her, one of whom was born only days before Vannie’s death in 1871.

What emerges through all of this dry factual information is the story of family love. After their marriage, Vannie and John had a close personal relationship with her grandfather, Sheldon Johnson, they even named their first son Sheldon Johnson Hawkins. Only five years after her grandfather’s death, Vannie died after giving birth to a daughter, and then the daughter died as well. John was then left as a widower with a ten-year-old son and a six-year-old daughter, and control of at least 130 acres of land.

Records show a marriage in 1873 of a John Hawkins to a “Katie Donnstetter.” Katherine D. Hawkins was of German descent and born in Germany in 1850. It appears that she was married previously to a Mr. Darmstatter, as Henry Darmstatter, age 9, stepson, is living with John and Katherine in 1880.

The most plausible explanation of a construction date for 2650 Clague is that the house was constructed in anticipation of John Hawkins' marriage to the 23-year-old widow Katherine in 1873. During John and Katherine’s 30 years of marriage, Katherine gave birth to nine children, eight of which were still living in 1900. Even after John’s death in 1903, Katherine may have continued to live in the house, possibly until she sold it in 1920.

Katherine died in 1925 at her daughter’s home in North Olmsted. She may have occupied the subject home for as long as 47 years, much longer than any other occupants. Part of Hawkins Road is now located on what was once the Hawkins farm.

Because the Westlake Historical Society has determined through its research that the house at 2650 Clague Rd. was likely built in 1873, it qualifies for a century home plaque. For more information about the Westlake Historical Society's plaquing program for century homes in the city, call  440-808-1961 or westlakehistory@yahoo.com. A $50 application fee defrays some of the cost of doing the research to determine if the home is one hundred years old. If it is found to be a century home, the applicant is notified and is eligible to purchase a personalized plaque with the approximate construction year from the Society for $75.

William R. Krause, AICP I am the Assistant Planning Director for the City of Westlake. I have worked for Westlake for 23 years, I have recently resigned from Bay Village Planning Commission after moving from Bay Village to Westlake. I am the Historian for the Westlake Historical Society and a trustee of the Western Reserve Architectural Historians. I have been married to Debra for 31 years and am the father of three grown children and owner of two Shih Tzu's.