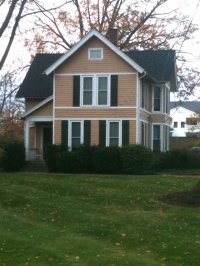 During the 19th and early 20th century, parts of Bassett Road in Dover Township (now Westlake and Bay Village) were known as Dutch Road and Elbow Road. “Dutch” for the residents along it, many of whom were of Germanic ancestry, “Elbow” for the angled configuration of the section between Dover and Detroit roads. St. Paul Lutheran Church was the heart of this community of German people and Bassett Road formed the spine.

Among this second wave was Dietrich Kluever (sometimes spelled Kleuver and pronounced “Cleaver”). By 1868 he had purchased 20 acres of land on the northeast corner of Bassett and Detroit roads. The 1870 census lists Dietrich and his wife Margarett living in Dover Township with seven children, all of whom had been born in Ohio, the oldest born about 1853. It is unclear exactly when the family came to Dover.

By 1871 Dietrich had purchased an additional 22.5 acres of land directly west of the point of the “elbow” (currently across Bassett Road from St. Ladislas church). In about 1869 Dietrich constructed a house on his northerly parcel which has since been torn down and then in 1888 a second house which still stands at 29102 Detroit Rd. In 1903 this home was in the possession of Gustav Kleuver, his son, who had inherited it. In recent times the home was converted to corporate offices but in the last year it has been converted back to a single family home with a beautiful park-like yard.

In 1892 Dietrich and his wife sold the 22.5-acre southerly parcel to their son, Otto Kluever, who was Gustav’s older brother. In 1893 the home at 2440 Bassett Rd. was constructed. It is a vernacular farmhouse in a gable wing configuration with a gable facing the street and a side wing with a hint of Victorian Stick style. The dormer over the porch with a shed roof may have been added later. Otherwise Gustav and Otto’s homes are remarkably similar in design.

In 1940 Otto and his wife Mathilde sold the home and 22.5-acre parcel to Carl and Lucie Kluever (brother and sister). The current owners purchased the home and 1.3 acres of land from Carl Kluever in 1988.

Besides these two existing homes there are two other interesting connections of the Kluever family to today’s Westlake. Dave Pfister, an officer of the Westlake Historical Society, recently named Mr. Westlake by the Westlake Town Criers, is related by marriage to Otto Kluever. Dave’s great-grandmother Alma Kluever Pfister was Otto Kluever’s daughter.

The second interesting connection is that Otto and Gustav had an older brother, Henry. In 1935, Henry Kluever, a widower, “gave” his home and land on Dover Center Road to the organization starting the Lutheran Home. This was during the depths of the Great Depression and the property had a large mortgage on it. The deed indicates that the Lutheran Home assumed the mortgage he owed on it. In return Henry was one of the first residents of the home. He spent his last days as a resident of this cherished Westlake institution. Today Lutheran Home is part of a growing continuum of care community called Concord Reserve.

William R. Krause, AICP I am the Assistant Planning Director for the City of Westlake. I have worked for Westlake for 23 years, I have recently resigned from Bay Village Planning Commission after moving from Bay Village to Westlake. I am the Historian for the Westlake Historical Society and a trustee of the Western Reserve Architectural Historians. I have been married to Debra for 31 years and am the father of three grown children and owner of two Shih Tzu's.