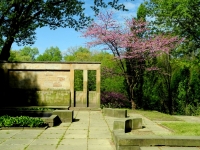 On May 7, the Westlake Garden Club sponsored a bus tour of Cleveland’s Cultural Gardens. Wonderfully organized by Ruth Bertrand, with reservation assistance by Nancy Chopp, we were accompanied by historian Rebecca McFarland.

Located in Rockefeller Park, a 254-acre expanse of land John D. Rockefeller donated to the city in 1896, the first garden was created in 1916 as a tribute to William Shakespeare. Ten years later, the Hebrew Garden became the first “culture” garden and the Shakespeare Garden was renamed the British Garden. Following the Depression, the Works Progress Administration (WPA) provided funding for 13 new gardens.

Currently there are 29 established gardens, with more in the planning stages. Each garden displays its ethnic culture in its own way. Some use interpretations of architecture and garden design principles from that country, while others contain statues, busts and plaques honoring that country’s poets, composers, philosophers, writers and artists.

Although our tour was a little early for all spring clean‑up, and some of the fountains were not yet turned on, we were inspired by the gardens we visited among the beautiful flowering trees. This was an educational experience for me and made me appreciate even more what can be accomplished when people come together.

Of particular interest was what appeared to be a relatively unremarkable slope of grass and trees; but we learned the soil underneath was brought to Cleveland from 40 separate countries and mixed together to symbolize a mutual understanding across cultures.  Another was a column shaft from the Roman Forum topped with a bust of the poet Virgil in the Italian Garden.

It would take hours, or even days, to tour all the gardens and many of us will return to do just that. Perhaps on July 21 for “Opera in the Italian Garden” with Opera Per Tutti, or the August 24‑25 “One World Day Festival.”

Following lunch in Little Italy, we visited the historic Rockefeller Greenhouse, established in 1905, situated on four acres of land at the park’s northeast corner. Tulips and irises were blooming outside, with ferns and exotic plants inside. Rockefeller Park includes two separate entries on the U.S. National Register of Historic Places: one for its architecturally historic bridges, and one for its Cultural Gardens. I recommend taking the time to visit the only gardens of its kind in the world.

President of the Westlake Garden Club