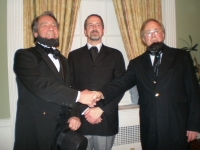 It is Feb. 3, 1865. President Abraham Lincoln and Jefferson Davis, President of the Confederacy, at war with the United States for the last four years, are meeting at Hampton Roads, Virginia, to see if a peace treaty can be reached to end the ongoing bloodshed. Lincoln has only two conditions for peace: The South has to return to the Union and return to it without slavery. Davis rejects these terms – the peace conference fails.

Our play, “Lincoln’s Last Great Debate: Abraham Lincoln vs. Jefferson Davis at Hampton Roads,” begins just after the official end of the conference as Plain Dealer reporter Franklin Boyd, played by Cleveland magistrate and Civil War historian William Vodrey, inquires if he can ask some questions. The presidents agree, each using this opportunity to explain their positions with their answers – in effect, debating the causes of the Civil War.

We’ll be presenting it at Westlake Porter Public Library on Sept. 12, 7 p.m., as part of the library's 2013 Civil War Series.

John Fazio, an attorney, historian and writer, portrays Jefferson Davis. I will be Abraham Lincoln. The three of us are members and past presidents of the Cleveland Civil War Roundtable.

The play is largely extemporaneous. While John and I know what questions will be asked – although William sometimes poses some new ones – we do not know for sure what the other will say in his answers, always making for spontaneity. We’ve performed the play a number of times and it’s never the same.

There actually was a peace conference held on Feb. 3, 1865. Lincoln attended but Davis did not, sending his Vice President, Alexander Stephens. Part of the conference is shown in Spielberg’s movie: ‘Lincoln.” Our poetic license adds Davis to the meeting.