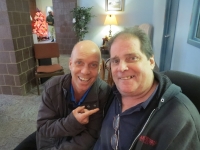 Two skaters, Kevin Bupb and Scott Hamilton, met at an ice skating rink in Bowling Green, Ohio. Scott was 10 years old at the time, Kevin a little older. They became good friends. Kevin, now a resident of Bay Village, is mentioned in Scott's book "Landing It: My Life On and Off the Ice." Young Scott wanted to be a comedian/clown on the ice like his buddy, Kevin, but it wasn't meant to be. Scott shares this story in his book.

Kevin and Scott practically lived at the rink. They practiced  together and skated in local amateur ice shows. Kevin was a frequent visitor to the Hamilton home. Over the years the guys remained good friends, even though their careers took different paths, Scott's to the Olympics and Kevin's to the Ice Follies and other professional ice shows. Scott is an Olympic Gold Medalist. Kevin is THE BEST CLOWN ON ICE. (My opinion, but so true.)

On Tuesday, Oct. 15, Kevin was in for a big surprise. That morning Scott, who was in town to work on details for his show, "An Evening with Scott Hamilton and Friends" which will take place Nov. 2 at the Quicken Loan Arena, came to the Knickerbocker Senior Apartments to visit his friend.

Kevin is retired from his job as maintenance technician at the Knickerbocker. Until recently he helped the maintenance crew when he was needed. Prior to working at the Knickerbocker he skated for the Ice Follies as a barrel jumping clown who often wore a blond wig and frilly dresses. His voice could be heard throughout the auditorium when he took a big fall. The audience loved his antics and robust personality. Kevin is currently being treated for lung cancer. Hospice is now involved in his care. Kevin is an inspiration to all who know him.

The two friends enjoyed each other's company that morning, rehashing old memories and solidifying a strong, lifelong friendship. Anne Naumann, Director of the Knickerbocker Senior Center, took a picture of the guys. You can tell by looking at the picture the strength of the bond they share by the smiles on their faces and the twinkle in their eyes. What a great memory for both Kevin and Scott.

Scott Hamilton, who lives in Nashville, Tenn., has a Cleveland connection. After being diagnosed with testicular cancer in 1997, he was treated at the Cleveland Clinic Taussig Cancer Institute and is now its lifetime spokesperson. His annual ice show, "An Evening with Scott Hamilton and Friends," is the primary fundraiser for the Scott Hamilton CARES Initiative, a partnership between Hamilton and the Cleveland Clinic, and its programs which include the 4th Angel Mentoring Program, Chemocare.com and research projects. This year's special guest is Cyndi Lauper, Grammy and Tony Award winner.

I participated in the 4th Angel program five years ago. I received help from a lovely lady who was my phone mentor. I was newly diagnosed and in treatment and needed someone to answer questions and just listen to me. A teacher from southern Ohio whom I've never met was my angel. The 4th Angel made a big difference in my ability to cope with cancer and move on to a healthy, happy life.

Kevin and Scott's friendship is something very special. Two men from Bowling Green many years ago have come full circle to meet in Bay Village to share a lifetime of wonderful memories. What a great story. Thanks, Kevin and Scott, for enriching so many lives through your unique talents and generosity.

Read More on One Senior's Opinion