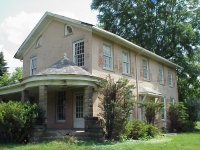 The Taylor House at 28989 Center Ridge Road prior to demolition.

[Part 1 of a two-part series on the historic Taylor House, which was located at 28989 Center Ridge Road, across the street from the St. John Medical Center, until its demolition earlier this year.]

It may seem dramatic to talk about “mourning” a house but that is the only way to describe some of the reactions expressed after the demolition of the historic Taylor/Lilly/Glendenning house, formerly of 28989 Center Ridge Road in Westlake. The brick, Federal-style house was built in 1833.

Over the last 14 years the house suffered what is known as “demolition by neglect” despite the efforts of members of the Westlake Historical Society and city of Westlake officials. The 10-acre property, zoned for office buildings, was purchased in 2000 for $900,000 with no limitations placed on it by the sellers. The purchasers sought demolition permits on several previous occasions but were dissuaded from demolishing it. Only recently when the condition of the building had become unsafe for passers-by did the city order the home repaired or demolished.

The good news is that the demolition company was very cooperative and worked with the author to save important pieces of the house. Virtually all of the stone, interior woodwork, doors and windows and the complete front entrance were saved for re-use. Preserved for the historical society was some early wallpaper; a set of the Federal-style half-fan vents from the attic; a complete window including sash, sill, casing and Federal-style trim; as well as a truckload of bricks. The window sash, from an upstairs bedroom, includes wavy glass most likely original from 1833. It makes the mind wonder, how did those window sash and fragile glass make it all the way to Dover Township in 1833, intact?

Testimony discovered from 1849 by John Taylor to then-county engineer Ahaz Merchant regarding property lines in the area discusses how John owned 110 acres and used to climb a maple tree to get a view east of his property. He had to climb a tree because portions of the area (possibly approximately where Bay Landings is now) were swampy and underwater because of a beaver dam. Reading an excerpt like that makes history come alive!

While efforts to save the Taylor house were unsuccessful, we would like to see as many of the 175 existing century buildings identified in Westlake preserved and restored. Most are not nearly as early or as high style as the Taylor house but they do help create the sense of place that is “Westlake.”

To help in these efforts, the Mayor and City Council set aside funds for Westlake to participate in the Heritage Home Loan Program, in partnership with the Cleveland Restoration Society. Margaret Lann, Heritage Home program associate, will speak on the topic at Westlake Porter Public Library at 7 p.m. on Tuesday April 22.