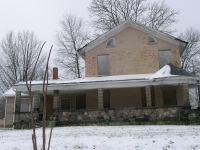 The Taylor House featured an elaborate veranda, constructed of what was believed to be Berea sandstone, which mirrored the style of buildings found on the Baldwin University campus. The university owned the Westlake home at the end of the 19th century.

Part 2 of a two-part series on the historic Taylor House, which was located at 28989 Center Ridge Road, across the street from the St. John Medical Center, until its demolition earlier this year. Visit wbvobserver.com to read the first installment in this series.

After John Taylor, the original owner of the home, died childless in 1850, it appears that the home went to sheriff’s sale and was purchased by his brother-in-law, Chester Dean. The Deans owned the property until 1853, when it was sold to the McCarteys who owned it until 1857.

With the help of Jeremy Feador, archivist of Baldwin Wallace University, some light was shed on why Baldwin University purchased the property for $13,000 in 1892. It may have been a way for the Lilly family, living in Elyria at the time, to avoid paying further taxes on it. What Baldwin University used it for is unclear. Because extensive renovations were done around the time of their ownership, one possibility is that they used it as a sort of early innovative satellite facility.

Baldwin University had a sister institution at the time called German Wallace College which catered to German-speaking students. Perhaps this was a way to serve or attract students from the many German families that farmed along Bassett Road in that time period? Another possibility is that it was to train students in agricultural arts or just to raise feed for the college’s livery horses or to raise fresh food for the students.

An intriguing clue that it was used for more than raising food is the fact that the very large, elaborate veranda, constructed of what appeared to be Berea sandstone, had a kind of institutional look, similar to the college buildings on their campus. The founder of Baldwin University made his fortune quarrying Berea sandstone and the university had a source of stone. The sweeping entrance of the veranda also appeared to serve the purpose of directing visitors away from the front entrance, up onto the veranda, towards the side entrances of the house.

On the inside, the whole first floor had been “modernized” for the time with new first-floor windows, oak trim, oak banisters, a widened, columned entrance into a front parlor, and replacement mantels.

Glendenning descendants who lived in the house were contacted for this article. They assumed the home was purchased from a previous farm family. No record of their purchase has been found. Perhaps it was another sheriff’s sale? Records indicate that Baldwin University was in a precarious financial situation at the time. If anyone has information on Baldwin University’s use of it, please contact the author at wrk295@aol.com.

While efforts to save the Taylor house were unsuccessful, we would like to see as many of the 175 existing century buildings identified in Westlake preserved and restored. Most are not nearly as early or as high style as the Taylor house but they do help create the sense of place that is “Westlake.” To help in these efforts, the Mayor and City Council set aside funds for Westlake to participate in the Heritage Home Loan Program, in partnership with the Cleveland Restoration Society.

Margaret Lann, Heritage Home program associate, will speak at Westlake Porter Public Library at 7 p.m. on Tuesday April 22. She will discuss the free technical assistance available to homeowners of any home at least 50 years old in Westlake and other participating cities.

In addition, many homeowners can quality for a low-interest loan to make the improvements. The rate is currently as low as 1.4 percent. You can also check out the program website at www.heritagehomeprogram.org.