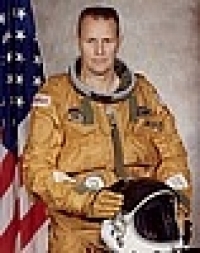 The state of Ohio has given birth to more than its share of astronauts. Westlake's own Col. Robert Overmyer is a distinguished member of this proud group. Although born in Lorain in 1936, Overmyer always considered Westlake his home. Overmyer graduated from Westlake High School with the class of 1954. He entered Baldwin Wallace College in the fall of 1954 and studied a scientific-oriented curriculum.

He entered flight school and became a U.S. military pilot. In 1969, Overmyer qualified to join the NASA program team. He soon gained entry into the Astronaut Program and helped with the engineering development of the Skylab project. His next assignment was as a support crew member for the Apollo 17 mission to the moon.

In 1982, he became the pilot of a 4-man crew that was to fly the Space Shuttle Columbia later on a 5-day mission to launch the first commercial satellites. In 1985, Overmyer commanded a 7-man crew aboard the Space Shuttle Challenger. Later he was part of the team that investigated the ill-fated disaster of that same Challenger in early 1986.

In March 1996, Robert Overmyer lost his life during an aircraft testing mission.

I am a fan of the history of Westlake!! Westlake Historical Society