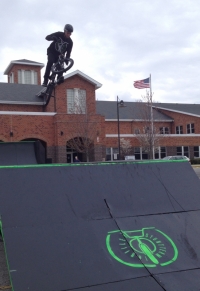 A Thriller Stunt Team rider gets Bay Middle School students and staff excited for Bike To School Challenge 2014 at the kick-off assembly on May 2.

When the Bike to School Challenge started in Bay Village back in 2008, no one could have predicted how incredibly popular it would become with Bay students. The program, which began with Bay High School, was expanded to include Bay Middle School in 2009. This year, it will include Westerly Elementary School for the first time. The award-winning program encourages students to bike to school, which not only helps the environment by reducing harmful emissions but allows the students to become healthier through physical fitness.

Over the past few years, schools in Rocky River and Medina were added to the challenge, making it the biggest bike-to-school program in the United States, according to program founder Scott Cowan, owner of Century Cycles. Last year, Bay middle and high school students biked 28,257 miles, took 9,783 round-trip bicycle rides to school, burned 480,369 calories, prevented 31,083 pounds of carbon dioxide emissions, and saved their parents $4,964.78 in gasoline.

You only need to travel down Wolf Road to the center of town to see how many kids are biking to school in Bay Village – it’s incredible to see the bike-lined fence outside the middle school.

This year, the number of kids riding their bikes to Bay Middle School totaled 530 on Monday, May 5, the first day of the challenge, and 573 on May 6. On May 7 there was a rain storm, but the number of riders was still an impressive 209 – roughly 25 percent of the school – according to Lawrence Kuh, a Bay Middle School teacher and one of the local event organizers. This compares to an average of 538 BMS students per day riding their bikes in 2013 – which is 66 percent of the school. Bay High School and Westerly Elementary School will participate in the last week of the program, starting on May 19.

According to Kuh, the high level of student participation makes this the No. 1 Bike to School Program in the U.S., and Bay Middle School is the leading school in terms of percentage of participation and sheer number of daily riders. Kuh attributes this to a number of factors, including the relatively flat topography and the proximity – no student needs to ride more than 2.5 miles.

There is also a lot of promotion and encouragement. Kuh reflects, “Now that the challenge has been running for seven years, new students come to the middle school actually looking forward to the program. There is a lot of excitement generated in the community through word of mouth. This is one of the largest community events in the city.”

The benefits of the program include the physical fitness proponent, community involvement and collaboration, and learning and promoting life skills. The students receive education on bike laws and bike safety. Kuh shares his love for the program, “There is an overall spirit of excitement in the school that is just palpable. After riding their bikes to school, the kids come in with smiles on their faces and give me high fives – it’s just awesome.” Kuh estimates that probably 25 percent of the BMS staff ride to the school, in spite of some longer distances to travel.

To kick off the event, the Thriller Stunt Team was hired to perform a BMX entertainment show in the parking lot at Bay Middle School on the Friday before the Challenge began. The Thriller Stunt Team is a local BMX stunt team with some of the top riders in the country, many whom are from northeast Ohio.

Students get tickets for riding their bikes, and at the end of the Challenge, the tickets are entered into a raffle. Prizes include a trip to Cedar Point. According to Kuh, a new prize is being added this year called the “Biver Ray Ride” – 10 students from Bay and 10 students from Rocky River will be treated to a bike ride in Cuyahoga Valley, a ride on the Scenic Railroad, and lunch at the Winking Lizard. These great prizes give the kids just another incentive to participate.