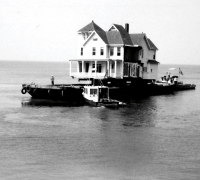 In 1984, the Fuller House was floated by barge to its new location on the BAYarts campus. Dr. Sheppard was arrested July 30, 1954, on the front porch of this, his parent’s home, and charged with the murder of his wife, Marilyn.

BAYarts will be marking the 60 anniversary of the Sam Sheppard trial this year with a gallery exhibit and related events beginning Aug. 8.

The house where Dr. Sheppard was arrested is BAYarts' own Fuller House, which was located in what is now Cashelmara at the time of his arrest. A celebrity in its own right, the 122-year-old Fuller House became international news 30 years later when it was moved to its current location on BAYarts campus via a barge on Lake Erie.

BAYarts will host an informal gathering on Aug. 13 on the Fuller House porch to piece together your personal memories of the people and the events. The gallery exhibit: "A Strange Holiday: An Aesthetic Examination of the Sam Sheppard Case" will open Friday, Aug. 8, 7-9 p.m. and run through Sept. 27 in the Sullivan Family Gallery.

Got a story or tip? Email fullerhousestories@bayarts.net.