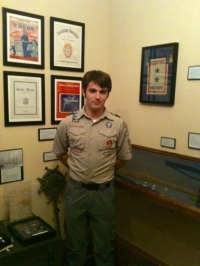 Nico DiGiulio stands in the military history exhibit at the Clague House Museum, which he expanded as part of his Eagle Scout project. Photo by Brenda DiGiulio

On June 6, Nico DiGiulio unveiled his Eagle Scout project at the Westlake Historical Society. The project renovated and expanded the military history exhibit at the Clague House Museum. Previously the exhibit was in a hallway but has now been moved into its own room within the museum.

The room details artifacts starting from the Civil War era and includes uniforms and memorabilia from the Spanish-American War, World War I, World War II, and Vietnam. Most of the displayed items were donated by Westlake residents. This is a fine adition to the already well done exhibit at the Clague House.

Nico DiGiulio is a Westlake resident and will be a junior at Westlake High School. He is a member of Boy Scout Troop 41 in Bay Village. He chose this project to combine his love of history with his desire to do something lasting for the Westlake community.

The Westlake Historical Society is honored to assist both Boy and Girl Scouts with projects.

The Clague House Museum is the home of the Westlake Historical Society, a 501(c)(3) organization. The society is dedicated to preserving Westlake's rich history.

I am a fan of the history of Westlake!! Westlake Historical Society