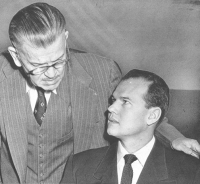 July 4, 2014, marked the 60th anniversary of Marilyn Sheppard’s murder in Bay Village. The anniversary garnered newspaper stories as well as coverage on local public radio and television. It also elicited comments from viewers of a Bay Village Historical Society display about the murder at The Reuben Osborn Learning Center in Cahoon Park. The comments were split about 60/40 between those who believe Sam Sheppard was guilty and those who believe he was innocent.

One viewer stated that her father was a surgeon who worked at the penitentiary in Columbus where Sam Sheppard was held. Sam was not able to work as a physician while incarcerated but was able to assist him, and this surgeon, based on Sam’s character and behavior in prison, was convinced of his innocence.

For younger readers who are not familiar with the details of the murder and subsequent trials, the 1954 Sam Sheppard trial was the O.J. Simpson trial of its day. After Sam Sheppard’s original defense attorney died, the Sheppard family hired a young, promising, but relatively unknown attorney living in Rocky River at the time – F. Lee Bailey! Now, most people associate F. Lee Bailey with O.J.’s defense but the Sheppard trial is what initially propelled his career.

Ginny also wanted to publicize the legal significance of the case. This is something she claimed that even many Bay Village residents don’t appreciate or understand. A series of appeals on the 1954 guilty verdict resulted in the 1966 U.S. Supreme Court case of Sheppard v. Maxwell, which struck down the murder conviction, noting the media circus that permeated the trial and the biased comments of the trial judge, among other factors.

"Sheppard remained in prison for 10 years while the case was ongoing," Ginny wrote in the book. "During this time the case was appealed and resulted in the Supreme Court of the United States’ landmark decision to strengthen the rights of defendants. Its decision established an individual’s right to receive a fair trial protected from the influence of prejudicial news accounts.”

As Ginny often stated – “it changed the law of the land.” According to Ginny it also gave the defendant the right to see all evidence before the trial. Incredible as this may seem today, it is my understanding from the books written about the Sheppard murder case that the Sheppard house was in the hands of the prosecutors and was not accessible to the defense attorneys during the initial trial.

Co-author Sally Price, former director of Baycrafters, was instrumental in another way in saving a big part of Sheppard history by saving the Fuller house, once owned by Sam Sheppard’s parents. She had it moved in the 1980s to the current BAYarts campus. It was on the porch of the Fuller House that Sam Sheppard was arrested.

Ginny’s last project as a member of the Bay Village Historical Society was attempting to organize the exhibit for the Osborn Learning Center for the 60th anniversary of the murder. Unfortunately she died before completing it and we have tried to carry through as best we can on her last wishes. An unexpected boon for the Osborn Learning Center was the donation by the Bay Village branch of the Cuyahoga County Library of six volumes of news clippings and articles related to the murder and subsequent trials – including the latest attempt ending in 2000 by Sheppard's son, Samuel Reese ("Chip"), who brought forth an ultimately unsuccessful wrongful imprisonment lawsuit. The clippings include articles in the New York Times and other major newspapers with national circulations. The library also donated copies of all the major books (and there are many) written about the murder and trials.

Ginny’s friendship with Dorothy Sheppard, Sam Sheppard’s sister-in-law, also resulted in the donation to the Osborn Learning Center collection a family photo album of Sheppard family photographs and a scrapbook of documents related to Bay View Hospital – which was originally owned by the Sheppard family. Dorothy served on the board of the hospital for many years. The photo album is a history of the three Sheppard brothers – Richard, Steven and Sam – and their lives in Cleveland Heights and Bay Village.

As for me, growing up in the 1960s in a household in Parma that subscribed to the Cleveland Press, I was convinced beyond a doubt that Sam Sheppard murdered his wife. After reading all the books I still must admit that his story of what occurred sounds fabricated and it is likely that he did do it but I am not  convinced that the prosecution proved “beyond a reasonable doubt” that he did.

TALK OF THE TOWN

When I began working for the City of Westlake in 1989 I was intrigued by stories from the then-clerk of commissions, Lee Andrassy, about the “Key Club” in Bay Village. It may be just an “urban (suburban) legend” but according to Lee, and others, it was a club consisting of married couples in Bay Village, in which members threw their house keys in a bowl and went home with spouses of other members. According to Lee, it was rumored that Marilyn and Sam were members of the club.

Ginny had another theory, which was even seamier. The rumors she heard were that when Sam was at the hospital late at night, Marilyn would light a lamp and she would accept visits from high school boys. This salacious talk was common gossip among the housewives of the day, but the media never picked up on the story. Sam’s infidelity was front page news as part of the trial but considering the double standards of the 1950s can you imagine those shock waves! This is even today a horrible thing to say about a dead woman who can’t defend herself. Would a husband go to prison to defend the reputation of the mother of his son?

One scenario, suggested by Sam’s testimony was that there may have been two people involved in the murder. This is touched on in at least one of the books because Sam talked about seeing a figure in white standing over Marilyn’s body in the bedroom as well as the ‘bushy-haired man.” This scenario has Sam hit on the head or neck from behind and knocked out by the “bushy-haired man” in the upstairs hall. Could it be that an enraged mother or wife found her son or husband with Marilyn, killed her with a bedside lamp and the son or husband is the “bushy-haired man” covering up for the female killer? They then stage a fake burglary as a cover for the murder?

Few people know any of Westlake’s connections to the murder. It has been incorrectly reported that Sam Sheppard was the "go to" man for the Bay Village Police Department. Actually Sam was the "go to" man for the Westlake PD. Sam’s father, Richard, had the ingenious idea to make each of his sons the official physician for a local suburban police force. This probably was a way to channel business to the Bay View Hospital. In early 1954 Westlake Council voted to make Sam Sheppard the official physician connected with the police department. Therefore, according to his testimony, it was his Westlake Police Department badge pinned in his wallet which he saw on the floor of the hall when he woke up after his first being knocked out. After Sam’s arrest in 1954, Westlake Council voted to rescind his position.

One of the two Cleveland homicide detectives who first questioned Sam was Patrick Gareau. Pat was attending law school at night and later became the law director of Westlake. He was the law director in 1989 when I began working for Westlake and the law offices in Westlake’s new city hall are dedicated to him. His son, Fr. Timothy Gareau is the current pastor of St. Raphael’s Church in Bay Village.

Fred Drenkhan was the first Bay Village police officer called to the scene of the Sheppard murder. The Osborn Learning Center display includes a copy of his initial police report. He later became the police chief of Bay and his son, Dennis, was a fire lieutenant for Westlake until his retirement.

Richard Eberling, a suspect in the Sheppard murder, grew up on Bradley Road in Westlake. As recently as 1988, when he resided in Tennessee, he submitted an application for a lot split for property that he still owned on Bradley. He was subsequently convicted of murdering a woman in Lakewood and died in prison. His former farmhouse on Bradley was recently encapsulated with new construction around it to create a new house.

St. John Medical Center in Westlake was known until recently as St. John West Shore Hospital. It was created in the 1980s from the merger of St. John’s Hospital of Cleveland and the old Bay View Hospital.

Many people ask about what happened to the Sam and Marilyn Sheppard house. It was located three houses west of Huntington Park on the north side of Lake Road. According to a visitor to the display at the Osborn Learning Center, it was occupied after the murder “by a good Christian family who were members of Bay Presbyterian Church.”

The woman of the house would have meetings there and invite guests up to see the bedroom where the murder occurred. The room of course had been cleaned and repainted but would you be able to sleep in that room? The home was torn down in the 1980s or 1990s to make room for the new house that occupies the lot. But the curb in front of the driveway apron is probably still the curb from the 1950s. It witnessed and felt the steps or tires of Marilyn, Sam, Chip, Richard, Stephen and Dorothy Sheppard, Officer Fred Drenkhan, F. Lee Bailey, several sets of jurors and a murderer or two.

The Reuben Osborn Learning Center is free and open to the public most Sundays from May until October, 2-4:30 p.m., or by appointment. Please call 440-871-7338 for an appointment.