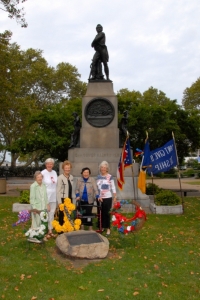 The Peter Navarre Chapter of the United States Daughters of 1812 participated in the annual commemoration of the Battle of Lake Erie. A wreath-laying ceremony was held by the Early Settlers Association on Sept. 10, 2014 – the 201st anniversary of the battle.

The event took place at the Oliver Hazard Perry statue in Fort Huntington Park, at the corner of Lakeside Avenue and West Third Street in Cleveland.

The Bicentennial of the War of 1812 is in the final year. The Treaty of Ghent was signed on Christmas Eve 1814, and ratified soon after by the British. Due to lengthy travel time across "the pond," the United States did not ratify the treaty until Feb. 17, 1815, at which time the war officially ended.

During this time period, Andrew Jackson defeated the British at the Battle of New Orleans, Jan. 8, 1815. Battles continued on the high seas after the war until news of the war's end reached ships at sea.

Members of U.S.D. 1812 have proven lineal descent from an ancestor who served the United States in a civil or military capacity during the years 1784 to 1815. For membership information, contact Marlene Wilkinson, marwilk32@hotmail.com.

Past Regent of Martha Devotion Huntington Chapter, Daughters of the American Revolution.