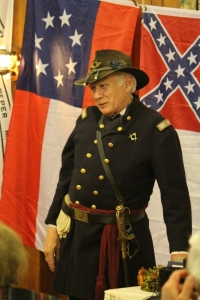 It was standing room only at the November potluck of the Bay Village Historical Society.

Upon entering the Community House, members were transported back to the Civil War in 1862. Lining the doorway were seven 105th Ohio Volunteer Infantry soldiers welcoming us to the potluck and program. The tables were festive with flowers of fall colors and small pictures of Ohio heroines. Thanksgiving dinner was set on a large table in front of the fireplace.

Draped across the wall as if hung on a clothes line were Tom Gorgas’s Civil War flags representing the Union and the Confederate troops. Civil War rifles were stacked in the corners of the room. The traveling Civil War trunk from the Lakewood Historical Society was on display along with memorabilia from Rose Hill and Tom Phillip’s Civil War rifle. Two authentic period quilts were shared by Sharon Morton depicting typical fabrics and designs used during this era.

The program was titled "Ohio’s Unsung Heroines, Women in the Civil War." Cathie Clager and Rita Wolansky, the speakers, narrated a sophisticated software program of sight, sound and motion to bring alive the stories about the ladies of Ohio who became active participants in the war.

One of the ladies, Dr. Mary Edwards Walker, was an American feminist, abolitionist, alleged spy, prisoner of war and surgeon with the 52nd Ohio Infantry. She is currently the only woman to ever receive the Congressional Medal of Honor for Meritorious Service. There were only 28 surgeons for the entire army in April 1861.

Another Ohio native was Mary Ann Bickerdyke. Mary Ann attended Oberlin College before the war. Her exploits as a nurse made her beloved by the common soldier and respected by the likes of Ulysses S. Grant and William Tecumseh Sherman, both of whom allowed her free rein to do whatever she deemed necessary to secure adequate care for the Union soldiers.

The fighting McCooks of Carrollton, Ohio, are another story. Major Daniel and Mrs. McCook had nine sons. All but one went off to war. Her suffering was very real as so many of her boys and her husband died during the conflict leaving her at home to tend the farm with one son. We learned it wasn’t easy for those left behind at home.

The 105th OVI re-enactors mingled with the crowd and sat with the members during dinner. Major Don Van Wert gave a talk about the Ohio regiment and what being a re-enactor means. We learned about the meaning of wearing the Masonic square and compass on their waist coat on the battlefield. We learned that if one man died from battle wounds, two died of disease. There were 425 deaths per day and 620,000 men died in the Civil War.