Westlake house has a Chinese connection 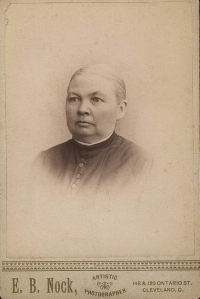 Ann Willis Bement, and her husband, Lorenzo C. Bement, owned property at Bradley and Center Ridge roads in the 1800s.

In the Dec. 9 issue of the Observer we discussed that the stone building at 30419 Center Ridge Road, just west of the old Green’s Garage, was probably built for Jonathon S. Lilly around 1846. Jonathon was the youngest brother of Austin Lilly who had the original stone portion of the Lilly/Weston house at 27946 Center Ridge (next to the Westlake Recreation center) built in about 1844. So there appears to be a strong connection between the two surviving stone houses on Center Ridge Road in Westlake, if in fact it was constructed in the 1840s as we believe.

Cuyahoga County auditor records, however, give a construction date of 1890 for the curious little building. An 1870 tax map shows a home in its location with a barn on the north side of Center Ridge Road. The Hanks family owned the property in 1870.

By 1880 the property was owned by Ann Bement, the wife of Lorenzo Bement. Lorenzo Bement was a postmaster with a grocery store on the southwest corner of what is now Bradley and Center Ridge roads.

At that time Bradley Road stopped at Center Ridge and Lorenzo Bement owned quite a bit of the land on all sides of the intersection. The area was known as “Bement” due to the presence of the Bement post office and grocery store. Tax records indicate that the 15-acre parcel that the stone building was located on actually went down in value in 1891 which is further indication that the 1890 construction date is bogus.

By 1905 Ann Bement had died and probate records indicate that her property was distributed to her husband and their four daughters: Nellie Green of Folger, Lorain County; Winnifred Fligle/Fliegle of Cleveland; and Lucy P. Bement and Frances K. Beme