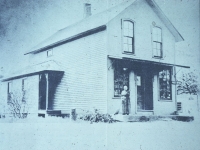 Dr. Lucy P. Bement and Frances K. Bement were brave sisters who served as Christian missionaries to China in the early 20th century. Also, from 1912 until the 1940s, they owned the little stone home at 30419 Center Ridge Road in Westlake.

They were born in Dover Township (as Westlake was originally known) just after the Civil War and Lucy lived until the eve of World War II, Frances until after the end of it. Their father, Lorenzo C. Bement, was a postmaster in Dover who owned a grocery store at what became the southwestern corner of Bradley and Center Ridge roads, where Wagner’s Country Inn is located today.

Passport applications show that Lucy was a missionary doctor who lived in Shao-wu (aka Foochow) China for at least 17 of the 20 years between 1899 and 1919. Frances was an Oberlin College-educated teacher who served alongside her, but they seem to have always called Dover home. Despite the Boxer uprising in China from 1899-1901, which included the massacre of numerous Christian missionaries, including many from Oberlin College, the Bement sisters carried on. They sought and obtained emergency passports in Hong Kong in 1912 during the fall of the Q’ing Dynasty (the last Chinese imperial dynasty)  for “travel and protection.”

It is unclear how long they actually occupied 30419 Center Ridge. Travel records indicate they sailed to England in 1912 and they also did sightseeing in Japan when traveling to and from China. The 1920 U.S. Census has Frances as an “inmate” of a congregate living facility for missionaries at 101 East College St. in Oberlin, along with other missionary families, many with children born in Ceylon, Turkey and Japan.

The 1930 Census lists Lucy and Francis as residents of Claremont, Los Angeles, Calif., which was the location of another missionary facility. An Oct. 14, 1938, news tidbit for Dover Center in the Elyria Chronicle Telegram states that “Miss Frances and Lucy Bement left Friday for Los Angeles, California where they will spend the winter,” suggesting that they lived in Dover for at least part of the year.

A family story about “Kit” (Frances) and “Goody” (Lucy) posted on Ancestry.com states that it was in 1897 that they first went to China under the American Board of Foreign Missions and put up 10 buildings, comprising a hospital, a school, churches and other buildings, and that Dr. Lucy ran the hospital and Kit ran the girls school. According to the story, Kit said, “I boarded the school girls, fed, medicated and educated them, all for $100 a month.”

Kit was called the “Mother of 1,000 Daughters,” a title from Chinese lore where a girl has two mothers, her mother by blood and her teacher. The story continues that in 1930 she or they left China and went on a lecture tour for the American Board that included 40 states. The tour was followed by a 12-year stint in a missionary home in Claremont, Calif. The story concludes that she summed up her life with “It has been a wonderful life and experience. I would do it all over again.”

Kit and Goody are both back home, buried in Evergreen Cemetery.