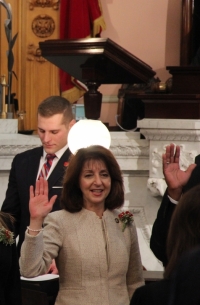 Nan Baker was recently sworn in for her fourth term in the Ohio House of Representatives.

State Representative Nan Baker has been named the chairwoman of the Ohio House Economic and Workforce Development Committee for the 131st General Assembly.

"I am excited to again chair the Economic Development Committee with a focus on workforce training. Since I began my service at the Ohio House, creating an environment to retain, create and bring jobs to Ohio has always been our goal,” said Baker.  “In this 131st General Assembly, we will also focus on encouraging our Ohioans to obtain the skills they need to obtain a good paying job."

Rep. Baker has been a small business owner for more than 30 years, and has received numerous awards throughout her career for her dedication to the business community. She has also been a member of the West Shore Chamber of Commerce for two decades, serving as president for two years and currently serving as a member of the board of trustees.