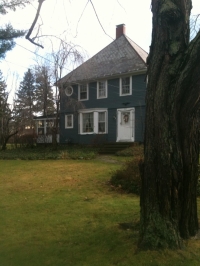 The Frank Sadler House on Bassett Road, built between 1900 and 1910, is one of Bay Village's century homes. Photo by William Krause

The Bay Village Historical Society is tentatively planning a tour of century homes on Bassett Road next fall. In preparation for the tour we are researching the history of the homes and hope to update the community with our findings from time to time here in the Westlake | Bay Village Observer.

The first home that we have researched is the Frank Sadler home at 317 Bassett Road. At one time it was the only home on the east side of Bassett in the area between Electric Boulevard and Lake Road. Frank Sadler was the son of William E. Sadler and Ann Eliza Lilly Sadler.

In 1876, William E. Sadler constructed a large Victorian home which still stands at 31065 Lake Road. William E. grew up in a Greek Revival home that his father William Sadler built that up until a few years ago stood at 29737 Lake Road, the southeast corner of Ruth and Lake roads.

The elder William Sadler was among the earliest settlers of Dover Township. After serving in the War of 1812, he arrived in Dover in 1815 with his wife, Elizabeth. She was one of the founding members of the Dover Lakeshore Methodist Episcopal Church which was the forerunner of the Bay United Methodist Church which stands today on the southwest corner of Bassett and Lake roads.

At first the members worshipped in their homes or a cabin constructed from walnut logs cut from the Sadler woods. In 1840 it was Elizabeth who gave the land and much of the material to build the first frame church building at that location. That frame church was in use until 1907, right around the time that Elizabeth and William's grandson Frank built the house at 317 Bassett Road.

In 1899 Frank purchased five acres of land from his father that includes the land where 317 Bassett Road sits. The 1900 U.S. Census has Frank, his wife Carrie, and their four children residing in a rented home near his recently widowed mother. The 1910 U.S. Census has the family residing at #1 Bassett Road, which almost certainly is the current 317 Bassett Road. He is listed as a general farmer living in a home with a mortgage.

The county auditor gives the date of construction of 317 Bassett Road as 1909, though their dates of construction are not always accurate. We are confident that the home was constructed between 1900 and 1910 which qualifies it as a century home.

The 1920 U.S. Census has Frank and Carrie residing on Bassett Road with five of their children. He is still listed as a farmer. Son Charles, 27, is a salesman. Son Clarence, 23, is a clerk in a grocery store. Son Russ, 22, is a house painter. Daughter Florence, 19, is a stenographer at the electric company. The youngest son, William, 14, is still in school.

Frank died in 1929 and the house passed on to Carrie. In 1930 the U.S. Census says that the household consists of Carrie as the head, with Florence still residing with her, and three lodgers. By this time Florence is a kindergarten teacher and one of the lodgers is a bank secretery with a young son. Carrie sold the home in 1937 and it has been bought and sold by four owners until it was purchased by the current owners in 1979.

Today, the home is owned by Jerry and Eileen Jarc.