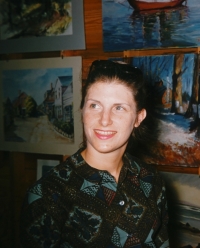 Sally Price, pictured in the Baycrafters circulating gallery in the 1960s, has made an indelible impact on Bay Village over her many years of service to the community. Photo courtesy Julia Shutt

His-story? Why not her-story? Just for today we will call it herstory, the story of much lauded historian of Bay Village, Sally Price.

I first learned of Ms. Price through the book she wrote with Virginia Peterson, "Images of America: Bay Village."

“Thanks to Ginnie and Sally we have a wonderful history of Bay Village," says fellow Bay Village Historical Society member, Evelyn Allen. “Sally provided a unique and personal perspective of life here since 1810. The photographs she provided and the captions she helped write give us all a precious history of our town.”

Added member Tom Phillips: “She is the ‘go to’ person when researching our history. Our most recent project was Sally’s idea. She, along with Will Krause and I, are locating Sears Catalog build-it-yourself houses from the 1920s. There are eight or nine of them in Bay Village."

Sally headed Baycrafters and was the organization's guiding force for several decades. “My mom is incredible, while an artist and a teacher, her collaborative efforts to move the Fuller House via Lake Erie made international news in 1984,” said Sally's daughter, Jill Price McLaughlin.

“She was also the lead on moving the Osborn House to Cahoon Park and the Caboose to the BAYarts campus," said Tom Phillips. "If it had not been for Sally, the Osborn house might have come under the wrecking ball and there would never have been a learning center.”

Through Baycrafters, Sally paved the way for BAYarts. “Sally was the creative force behind Baycrafters and BAYarts," said Executive Director Nancy Heaton. “When we were kids we always called the porch of the Huntington House 'Sally’s Porch.' Now BAYarts is following the lessons laid out by Sally, our guru; we honor her work by serving the community with integrity and respect for the history of the organization. The campus grew during her tenure of more than 30 years.”

BAYarts board member Julia Shutt describes Sally’s days at Baycrafters this way: “We kids would find Sally on the front porch of the Huntington House and she always took time to talk to us. Sally’s generous spirit and her ability to read a person’s passion made her the glue that helped me get started in the landscape business.”

One of Sally’s best-known projects during her tenure as executive director at Baycrafters was the annual Renaissance Festival. Large crowds came to Bay Village every Labor Day weekend for a trek back to the days of jousting, feasting and to relive, if only for a day, King Arthur’s Court and the Roundtable.

Sally reared four children as a single widowed mom and even though she worked many hours to support her family, she always devoted herself to the history of Bay Village. Her daughters, Jill Price McLaughlin and Vicki Price Lubin, live in Bay Village; her son, Chris Price, lives in Westlake. Daughter Donna Price Spence also lived in Bay Village until her unexpected passing last month.

There is much more to "her story.” Sally celebrates her 84th birthday on May 29. To share your memories, comments and best wishes with Sally, send them to editor@wbvobserver.com.