The Edward A. and Clydie B. Martin House, built in 1905 in Bay Village 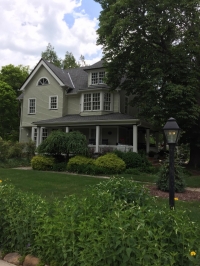 This century home on Bassett Road in Bay Village was built in 1905.

Part two of a multi-part series about century homes on Bassett Road in Bay Village.

The home at 427 Bassett Road is a tall, substantial home located just south of the Bay High School driveway that exits onto Bassett Road. An expansive porch, several bay windows, and an assortment of other window shapes and sizes give the front façade a warm, welcoming, cozy feel. It has a touch of the Queen Anne Style in its asymmetry and the use of shingles on the façade. Previous sources have given the date of construction as circa 1890 but tax records clearly indicate that it was constructed in 1905.

In 1904 the one acre of land that the home was constructed on was carved off of a 13-acre parcel owned by Henry Frederick and Louisa M. E. Albers. The property transferred on Jan, 30, 1904, and work may have begun on the home the following spring but the tax value did not increase until the second half of 1905.

In 1911 Edward A. Martin purchased two acres of land on the Theodore Lieberick estate from Robert Hassler, the executor of the estate. These two acres are where the current school driveway is located. Edward and his wife, Clydie, bought and sold land in Lakewood and Bay Village, including a parcel of land on Lake Road in Bay, where they may have been living by 1918.

A deed recorded in 1916 has 427 Bassett transferring to Agatha M. Schwentner. In 1920 Agatha and her husband, F.W. Schwentner, sold 427 Bassett to Henry W. and Augusta L. Stohlman. Probate court records from 1930 indicate that upon the death of Henry W., his wife Clara H. Stohlman could use and occupy the house and land situated on Bassett Road for one year after his death or until such time in which the estate has been satisfactorily administered; the rest of his property to go to his children. This suggests that Clara may have been his second wife and not the mother of his children or perhaps we are reading too much into this and this Henry W. was the son of Henry W. and Augusta Stohlman? Apparently it took a while to settle the estate because the house was not sold until 1942. In the meantime it appears to have been rented out based on names listed in the Bay Directory for the late 1930s.

In 1942 the property was purchased by Groff L. and Ruth M. Woodward for $9,500. The Woodward family owned the property until 1966 when it was sold to E. Osborn Inc. with a tax mailing address on Osborn Road. This company may have renovated the home and then sold it to Evelyn B. Overdorff. She owned the home for 15 years until it was sold to Deborah L. Hiller. Deborah Hiller and Alan J. Ross owned it from 1981 until 2005 when they sold it to Norman J. and Mary Davis Riley, who are the current owners.

The property has an attractive outbuilding, several very old trees and is beautifully landscaped. The front porch is well appointed with chairs that complement the architecture. It is obvious that this is a home that has been well loved over the last 110 years.

William R. Krause, AICP I am the Assistant Planning Director for the City of Westlake.