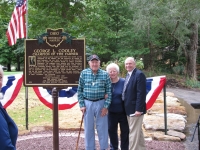 This marker honors one of Westlake's own. Affectionately known to many as "Uncle George," he has myriad credits to his name – teacher, contractor, road builder, insurance executive and organizer of county and state farmers.

He was the contractor for the Huntington water tower in Bay Village, as well as many homes and barns throughout the community. George built some of the first paved roads in Ohio and helped organize the state department of transportation, as well as those in California and Louisiana.

The marker is located near the Westlake Police Department on Dover Center Road, on land that was once owned by the Cooley family.

George Cooley was a fine Dover/Westlake citizen and we are proud to honor him in this way.