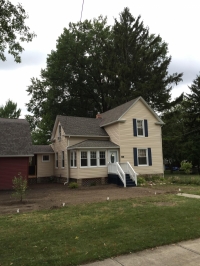 The Frank and Anna Vanek house on Bassett Road in Bay Village was built in 1910. It looks like a typical farmhouse, but research indicates its owners likely never farmed. Photo by William Krause

Probably anyone who lives in the west end of Bay Village has noticed some dramatic changes that have occurred in the southernmost block of Bassett Road, just north of the railroad tracks in the last couple years. Several small cottages have been replaced by substantial new homes on the east side of the street, while on the west side of the street, just north of Crossroads Church, a century home has received lots of investment.

The house looked kind of forlorn for a number of years until it was purchased by new owners. Improvements include a large attached garage, painted red with a gambrel roof that looks like a barn. It is a nice addition to the house which looks like a typical gable/wing vernacular farmhouse.

However, it may never have technically been a farmhouse. In 1905 Frank Vanek purchased 6.12 acres of land from the C.M. Oviatt Manufacturing Co. His parcel was originally roughly the same size as the existing church parcel and it backed up to the Lutheran Mission Grounds which were accessed from Ashton Lane, once known as Link Road. To the north of his parcel was Henry and Maria Hagedorn's 18-acre parcel.

The home was built in 1910 by Frank Vanek and remained in the Vanek family for an incredible 86 years with Anna Elizabeth owning the property after Frank passed away in 1944. According to the Bay Directories she occupied the house for another 50 years until 1994. They also indicate that Elizabeth Irene Vanek, their daughter, occupied the house until 1996.

The 1930 U.S. Census has the 46-year-old Frank and 33-year-old Anna occupying the home along with their daughters, Elizabeth, 12, and Marian, 5, along with his brother Joseph, 52. The reason that this may never have really been a farmhouse is that Frank is listed as a carpenter working in home construction in the Census and that he does not own a farm. Based on this information there is a chance that he literally constructed the home, which was valued for the Census at $15,000 in 1930, and that any agriculture that occurred on the property was more of a sideline. An interesting footnote, considering Bay Village’s proximity to Lake Erie, is that his brother is listed in the Census as working in the boat repair business.

While some may object to changes made to the house such as vinyl siding and replacement windows and doors, it is nice to see investments made in the existing housing stock of Bay Village rather than just another teardown. I think Frank and Anna Vanek would be proud.