Who were the Westons of Westlake? A generation devoted to education 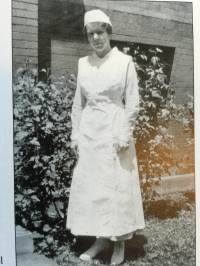 This photograph of May E. Weston was taken to commemorate her 1918 graduation from the Ohio University. Photo courtesy William Robishaw Collection, Westlake Porter Public Library.

Part three of a five-part series.

In part 2 of this series in the Sept. 1 issue, we introduced you to the three sons of George and Rhoda Weston who all had farmland cut from their parents' 100-acre farm on Columbia Road in the late 1800s and early 1900s. George and Rhoda had earlier occupied the Lilly-Weston house at 27946 Center Ridge, next to the Westlake Recreation Center.

The initial division of land on Columbia had Asa L. receiving the northerly portion, on which he built a home in 1883 which still survives at 2283 Columbia Rd. Another trace left on his land is a street named Weston Avenue which now serves as the entrance driveway into Cuyahoga Community College’s Corporate College. This is very fitting because a number of Weston descendants served the community as teachers or in other capacities which supported education in Dover, Westlake and the Greater Cleveland area.

Asa L. married a woman named Elmyra and together they had two surviving children – George I. and May E. Weston. Unfortunately Elmyra died and 2-year-old May went to live with her grandparents, George and Rhoda. Asa eventually re-married and moved to Alabama with his wife and their son Herbert.

May both attended and taught school at the old Mitchell school house which still survives at 24231 Center Ridge Road, just east of Gale’s Garden Center. May enjoyed recounting how as a student there she was able to throw a baseball and hit the eagle sculpture on the U.S. Centennial plaque inserted into the new schoolhouse gable when it was constructed in 1876. The stone plaque still survives as a landscape element in the front yard of the property today. She said that her reward for being able to hit the plaque was to join the boys in their recess baseball games.

May later earned a college degree in home economics from Ohio University and went on to teach in the Cleveland schools until her retirement. She was involved in the celebration of Westlake’s Sesquicentennial in 1961 and was instrumental in the founding of the Westlake Historical Society after the Sesquicentennial. She also wrote, for the Historical Society, “The First 100 Years of Dover Schools,” in 1969.

Her brother, George I., was also involved in the Dover schools; he was the first school bus driver in 1922! Prior to that he had been a North Olmsted, Dover and Bay Village mail carrier and had a milk route in Lakewood for the Streeter dairy. He occupied the home that their father, Asa had built, and farmed 10 acres there.

George married a woman named Mida. They had a son and two daughters. Their son Leslie married a Dover High School teacher and moved away. Edna, their older daughter, became a home economics teacher and met her future husband George Kestel when she worked for the Ohio Farmer Magazine. Jeanne, their youngest, married John Sleasman who worked for U.S. Steel and she worked for several corporations herself.

With all of the ties to education, history and farming that this branch of the Weston family had, it is fitting that a home their father and grandparents occupied – the Lilly-Weston House – is planned to become a museum of local farming and history to educate children about the early days of Dover.