Who were the Westons of Westlake? A family dedicated to community service 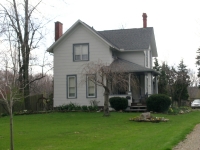 Part four of a five-part series.

In part 3 of this series in the Oct. 6 issue, we introduced you to the oldest son of George and Rhoda Weston, Asa L. Weston. In this article we will introduce you to their middle son, Arthur E., who received the center portion of their 100-acre farm on Columbia Road in the late 1800s. George, Rhoda and their sons had earlier occupied the currently city-owned Lilly-Weston house at 27946 Center Ridge, next to the Westlake Recreation Center.

Arthur built a home in 1888 which still survives at 2363 Columbia Road. He was a skilled carpenter and built seven homes in the West Hedgewood/Hall Road area. Both he and his wife, Clara Brown, taught briefly in the schools. Together they had three children – Lucy, Burton and Charles. From 1904 to 1909, Arthur was clerk of Dover Township and was a member of the Dover Village Council in 1914 and 1915. In the 1920s he became the clerk for the Dover Village School Board.

Daughter Lucy graduated from Oberlin College, and taught most of her career in the Mayfield Village Schools. While teaching there, she met and married Carl C. Scheuring, helping to run his country grocery and general store. Son Burton Weston married a woman named Maude; he worked for a seed company and by 1940 was the owner-operator of a nursery.

When Arthur died suddenly in the early 1930s, his son Charles Weston replaced him as clerk-treasurer of the Westlake (Dover) Board of Education, responsible for keeping minutes of the board meetings and handling the finances for the schools. To give an idea of the small size of the administration in those days – Charles also sometimes drove a Dover school bus!

During the Great Depression his was a challenging job, which included applying for WPA funds to help with school maintenance. His cousin-in-law, Mida Weston, wife of George I. Weston, was in charge of a welfare program established by the Dover Village Council. She oversaw the distribution of food supplies provided by the federal government. It was said that Mida Weston visited folks all over town to make sure that all needs were taken care of.

Charles married Esther Elliott of Dover and they raised three children – Doris, Ellen and Walter. Like his father, Charles was a fruit grower. His specialty was cherries. He also raised evergreens which were sold to landscapers. He was active in 4-H Club and was the first leader of the Boy Scout Troop sponsored by the Dover Congregational Church. He was an active member of the Dover Civic Club, Kiwanis Club and the Dover Masonic Lodge. He was a charter member of the Westlake Historical Society.

Daughter Doris, born in 1920, followed in his footsteps. She was very dedicated to Dover/Westlake, the Dover Congregational Church and, like both Charles and May Weston, to the Westlake Historical Society. Like many members of the Weston family she was a teacher. She taught in the North Olmsted and Chardon schools. Charles and Esther’s daughter Ellen took training as a hospital dietician in Chicago, married a Mr. Lohff there and raised two daughters in Illinois. Sadly the only son of the Charles Weston, Walter R. Weston, lost his life while serving in the military in World War II.

With all of the ties to education, history and farming, that this second branch of the Weston family had, it is fitting that a home their father and grandparents or great-grandparents occupied is planned to become a museum of local farming and history to educate children about the early days of Dover.