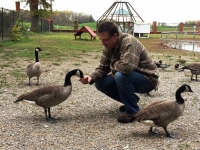 Eric Hansen of the Westlake Historical Society visits with a few of conservationist Jack Miner's favorite subjects on a recent trip to Kingsville for a celebration of Miner’s 150th birthday. Miner was born in Westlake. Photo by Joe Vermeulen

In 2012, Kingsville, Ontario, became a Sister City with Westlake through the common legacy of one John Thomas Miner, better known as Jack Miner. Born in 1865 near the present-day intersection of Dover Center Road and Westown Blvd., Jack moved with his family to Kingsville when he was 13. His early roots instilled in him a love of nature and wildlife and he studied migratory birds until his death in 1944, becoming known as the Father of Conservation. The August premiere of “An Evening with Jack Miner” at the Clague Playhouse generated an invitation for me to reprise the role at Jack’s migratory bird sanctuary in Kingsville.

On Oct. 16, with passport in hand, I crossed the border to not only attend but participate in the 46th Annual Migration Festival. This year’s festival was a little different as its theme included the 150th birthday of Jack. The festival celebrates Kingsville’s place in history as the home of the man who changed the migration routes of the fowls of the air. I arrived Friday afternoon in time to attend the festival’s opening ceremonies with a wine and cheese reception that was held in Kingsville’s Carnegie Visitors Center. Jack himself (or a very convincing American re-enactor) made an appearance and read from his autobiography, "Wild Goose Jack," setting a celebratory tone for the remainder of the weekend.

Saturday morning’s blue sky and crisp air was a perfect backdrop for the Migration Fest Parade with more than 40 entries. As the second float, the parade proceeded through downtown with Jack, sitting at a desk, in a re-creation of a familiar sight: Jack with a hammer and anvil, making impressions on goose bands so that the birds can be tagged, tracked, and their migration routes recorded. This rote process lead Jack to tag more than 50,000 ducks and 40,000 geese through a lifetime of conservation.

The town of Kingsville has a bronze statue of Jack Miner that sits in front of the former city hall, which is now the Ontario Provincial Police department. During this milestone year, the statue was reconditioned to its original beauty. Visitors can now see the detail of the trademark plaid shirts Jack wore. After the parade, family pumpkin carving, and a performance by a local drum and bugle corps, the statue was re-dedicated. Jack was again present to read a proclamation from Westlake Mayor Dennis Clough. Kingsville Mayor Nelson Santos accepted the proclamation as the sister cities continue to embrace strong relations.

The day’s activities progressed from downtown Kingsville to the Jack Miner Migratory Bird Sanctuary, north of town. It is here that visitors can experience the Miner homestead, as well as the original ponds, museum and resident waterfowl. The sanctuary’s Playfair Stadium hosted the festival’s art and photo competition. It was in this stadium that the Saturday night performance of “An Evening with Jack Miner” took place. On this special occasion, I was able to actually fit into one of Jack’s trademark green-plaid wool suits – pants, vest, coat, tie and all. The sanctuary’s staff was kind enough to allow me to wear the suit for the performance. As an actor portraying a person of historic significance, having the ability to actually wear their original clothing was truly a remarkable and humbling experience.

Early Sunday morning was spent with the sanctuary staff trying to capture enough birds for a banding. The efforts were interrupted by a coyote sighting near the ponds, and the experience of banding a bird, in the manner of Jack Miner, would have to wait until the next trip. It is on the bucket list. The remainder of the morning was spent getting acquainted with the resident waterfowl. Barley and corn are their food of choice and the sanctuary ensures there is always plenty to go around.

I truly enjoyed my trip to Canada and the wonderful people (and geese) I met along the way. If you ever travel to Kingsville and find yourself feeding a goose named Judy, please give her my regards.