by William Krause with research assistance by Dean Brennan 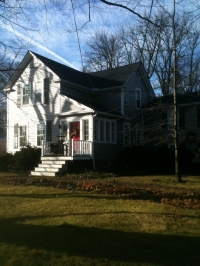 The former Hagedorn house at 600 Bassett Road was built in 1908.

It seems fitting to be discussing the home of some very devout family oriented Lutheran Christians in an issue of the Observer covering the period of the Christmas holiday. Lutherans not only introduced the custom of using an evergreen in their celebration of Christ’s birth, they shaped the early Dover (Bay Village and Westlake) community.

According to "Bay Village: A Way of Life," and a family history generously provided to the Bay Village Historical Society by Hagedorn descendent Janet Marie Toensing, the first Hagedorns to come to Dover were Henry, Katherine and their five children who came from Hanover, Germany, to America around 1852. They bought 30 acres of land at 603 Bassett Road and began farming.

The family attended Trinity Lutheran Church, on West 30th Street and Lorain Avenue in Cleveland. They walked the 15 miles from Bay Village to Trinity Lutheran every Sunday, taking a lunch basket with them and returning in the evening. In 1858 they helped organize St. Paul Lutheran Church (the third oldest congregation in Westlake). In a search of Cuyahoga County recorded documents, it was a “George H. Hagedon” who purchased 40 acres from Caleb Eddy in 1856, including the future site of 603 Bassett Road. The spelling of Hagedorn appears to have been somewhat fluid in these early years and it is reasonable to assume that Henry Hagedorn and George H. (Henry?) Hagedon are the same person.

It was this man’s grandson Henry who purchased 6.17 acres of land from David Sites for $500 in 1897, and eventually two additional parcels of 6.17 acres each to create an 18.51 acre farm at what would later become the southwest corner of Bassett Road and Ashton Lane. It was on this land in 1908 that Henry and Marie Hagedorn constructed the home that is the subject of this article.

This purchase is not surprising in light of an article that appeared in “Believe It or Not” by Ripley in a Cleveland newspaper in the late 1930s: “On Bassett Road in Bay Village, Ohio, within a distance of 400 feet are the homes of nine families of Hagedorns. There are five men Hagedorns and four women whose names were Hagedorn before they married.” Henry and Marie contributed to this phenomena, according to the family history, because upon the marriage of their three children, each were given a lot on Bassett Road where they built their homes.

The Hagedorn history book provides a glimpse into the lives of the family on Bassett Road in the early to mid-1900s:

Henry and Marie raised strawberries, raspberries, blackberries, apples and grapes on their farm along with potatoes and beans that they dried and hay for their horse. In addition to their horse, Katie, they always had a cow, a pig, and chickens. Every Saturday night one of the chickens was butchered for their Sunday dinner. They made their own wine from their grapes.

Marie baked fresh bread every Saturday and was well known for her apple and cheese strudels as well as her raised donuts on special occasions. She also spent time canning fruits and vegetables for winter.

When not working on the farm or in the kitchen she could be found reading her Bible, embroidering a pillow case or dresser scarf or putting a crocheted edge on one of her embroidered items or a hankie. Besides having her vegetable garden she always had beautiful flower gardens.

Henry was always busy on the farm. In the summer he would take his truck into Cleveland to pick up city kids to pick berries on the farm. About a dozen or so would ride in the back of the truck. After picking the berries all day he would have to take the kids back into the city, catch a few hours sleep and then around midnight would have to take the berries to the farmers market in Cleveland where grocers would buy the berries for their stores. He would get back home between 3 a.m. and 5 a.m. This was done every Monday, Wednesday and Friday.

Marie always had to have gingerbread cookies for Henry. He would take the cookies, put butter between them and that would be his sandwich for lunch. He always worked hard so those cookies never put an extra pound on him.

Henry came from a very large family. Almost every Sunday, especially during the summer, one of his brothers or sisters and their families would be waiting at their house when they came home from church. Because no one had phones they did not call ahead. They just came out from Cleveland by bus if they did not have a car. Of course, this always meant company for that chicken dinner and custard pie.

During the summer Sunday afternoons were spent visiting with relatives or friends on the white bench under the big ash tree in their back yard. Most of the conversation was in German.

Henry and Marie along with their children and their granddaughter, Carol Hagedorn, who died at age 11, are buried in St. Paul Lutheran Church Cemetery, Westlake, Ohio.