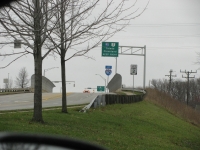 Should a resident of Bay Village or Westlake desire driving directions to Boston, Massachusetts, they would be quite straightforward: Simply enter Interstate 90 eastbound from the nearest access point in Westlake and follow that route all the way to the historic New England metropolis.

What if the above-mentioned resident wished to motor their way to Seattle, Washington, instead? The directions would be similarly direct (although encompassing much more mileage): Again enter I-90 from one of the two Westlake interchanges that permit westbound access to the highway and keep heading west until reaching the Pacific Northwest hub of technology.

Interstate 90, sometimes piggybacking along with other interstate routes, runs roughly 3,120 miles, completely traversing the northern United States with its western terminus being in Seattle and eastern terminus finding itself in Boston.

In our little corner of the country, I-90 and a roadway known as the “Northwest Freeway” are one and the same, having become an established fixture in Westlake. While it may seem to be so, the highway, however it is known, has not always been part of the local landscape. (Personally, I witnessed much of the highway being built in Westlake and now view it as something that has always "just been there.")

The Northwest Freeway was first proposed by area planners in 1952, along with a number of other limited-access throughways intended to criss-cross Cuyahoga County. These throughways were given descriptive names with their route designations to be determined at a later date. Not all of those originally planned throughways would go on to be built.

As its name implies, the Northwest Freeway was planned to provide speedy access to locations in the northwestern part of Cuyahoga County. As the national interstate highway system grew in the 1950s and '60s the scope of the Northwest Freeway evolved to that of a connecting artery linking the Ohio Turnpike west of Elyria in Lorain County to what would become the Interstate 71 Inner Belt interchange near downtown Cleveland.

While seemingly having no specific route assignment in mind for it while initially planned, it appears by 1961 the Northwest Freeway was to be incorporated as part of Interstate 90.

Construction of the Northwest Freeway was intended to begin in the mid-1960s and be completed by 1970. In Cuyahoga County numerous delays, for a variety of reasons, made that target an impossibility. Because the highway’s planned route through Westlake ran through mostly unimproved land, city leaders welcomed its construction and the improved access to potential industrial and commercial development it would bring.

In the communities east of Westlake the situation was completely opposite, with the highway’s route cutting through established residential neighborhoods, causing much disruption and the need to demolish a substantial number of homes and businesses. In those communities the planned highway was largely unwelcome by officials and residents, and many obstacles to its construction arose.

Unfinished sections of the Northwest Freeway would subsequently be built in intermittent stages, not only in Westlake but further to the east, and not until late 1978 would the roadway be fully opened.

As earlier predicted by its city leaders, construction of the Northwest Freeway through Westlake provided a catalyst for tremendous growth in the municipality. Vacant farmland abutting the throughway became quite attractive to various sized corporations, including Fortune 500 companies.

The commercial and industrial development spurred by the Northwest Freeway’s presence in Westlake brought jobs and additional residents to the city. From its first settler in 1811 it took up to the U.S. Census of 1970 for Westlake to claim more than 15,000 residents in the city. By the U.S. Census of 1990, 20 years later, Westlake added 12,000 more residents, nearly doubling its population to 27,000, thanks in large part to the Northwest Freeway’s construction early-on in that period.

There seems to be no question that the planners’ decision in 1952 to have the Northwest Freeway run through Westlake has had a positive effect on the city, on balance.