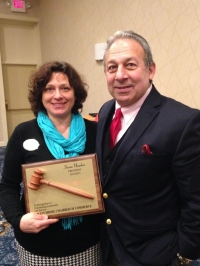 Over 100 people attended the Chamber of Commerce luncheon held at the Doubletree by Hilton as Westshore Chamber President Susan Uranker turned over the reigns to Jim Chilemi. Uranker, marketing director at Brookdale Senior Living, has served as the chamber president since 2014. Chilemi, a Bass Ohio realtor, began his term as the new president during this lunch.

Uranker is not going far, however, as she will serve as secretary this year, joining Tina Roberts as vice president and Mark Getsay returning as treasurer. New board members were also introduced, Elizabeth Beard from Dave & Buster's and George Hihn from Residence Inn/Emerald Event Center.

The lunch speaker was renowned economist Jack Kleinhenz. He gave a review of market trends and his speculation on where the market will go this year. Guests were offered an opportunity to ask specific questions after the presentation.

Next month's meeting will be held at the Emerald Event Center in Avon as part of joint chamber lunch with North Coast and North Ridgeville chambers on Feb. 17 and will feature Dr. Rebecca Starck from the Cleveland Clinic.