Bay Village plugging along, making most of resources 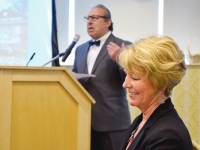 Bay Village Mayor Debbie Sutherland listens as Jim Chillemi, president of the West Shore Chamber of Commerce, introduces her State of the City address at the April 19 chamber meeting. Photo by Denny Wendell

Bay Village was hit hard by the recession, enduring the double whammy of decreased tax revenues and state funding cuts by trimming expenses and reducing staff. Mayor Debbie Sutherland has maintained that there is hope on the horizon as the economy recovers. In her annual State of the City address to the West Shore Chamber of Commerce on April 19, Sutherland reiterated that confidence, this time sharing economic indicators that support her optimism.

While a rise in tax collection has provided some “breathing room,” the city looks to take advantage of all possible resources – increasing the efficiency of city operations, partnering with neighboring communities and relying on the volunteerism of residents.

In the service department, director Scott Thomas implemented new work-order software. Iworq stores information on all open and closed work orders, including a history of service calls to a particular location, employees dispatched, time spent on site and photos of the project. All supervisors are equipped with iPads to access real-time information on the status of work orders. Not only does the process save time and identify recurring problems, it also helps with purchase decisions by tracking the equipment used on each call.

“It’s made our department even more responsive and productive and really targeted at correcting issues that come up,” Sutherland said in her address.

The fire department also launched a new database software program that tracks EMS calls and statistics and allows for more efficient EMS billing. Though the prospect of a regionalized fire department appears doubtful, Sutherland said Bay Village is still on the lookout for potential cooperative arrangements as outlined in a consulting firm’s consolidation feasibility study.

“We continue to constantly look at ways in which we can collaborate with our neighbors. I think most of the time people just want response time, they don’t really care if the truck says Bay Village on the side, or it says Westshore on the side, they just want to make sure that it gets there in less than four minutes. That’s our objective.”

Bay Village is one of 11 municipalities – the only one in the West Shore region – to be designated as ReadyCertified by the county. “We are very, very prepared and I think that the residents of Bay Village should be very proud of that,” the mayor said.

In a city that is 97 percent residential, the people who live in Bay Village are directly contributing to the city’s quality of life. Their personal income and property tax dollars make up the lion’s share of the city’s revenue, and their involvement in the community helps to fill in the gaps left by a tight budget.

“We could not operate without our volunteers across the city,” Mayor Sutherland said, giving kudos to Bay Village civic groups and the hundreds of residents that offer their time to the community services department. More than 6,500 outreach services were provided last year, from Meals on Wheels to medical equipment loans to holiday food and gift donations.

Regarding the city’s finances, Sutherland is encouraged by a 7.5 percent uptick over the prior year in income tax revenues and an increase in the amount of building activity across the city. More than $26 million in building permits were issued last year, mostly for residential alterations. “That’s an indication that the economy is rebounding,” she said.

Eleven new residences valued at a total of $3.25 million were constructed in 2015, a strong comeback from an average of 5-7 during the recession.

“We just keep plugging along,” Sutherland said. “Bay Village is really hot right now. There’s not a lot of [housing] inventory and if something comes up [for sale] ... a lot of those homes are demolished and then something new is being built in its place.”

Looking toward the future, Sutherland has been active in lobbying state leaders to recoup some of the local funding that has been slashed in recent years. She is co-chairing, along with Lakewood Mayor Michael Summers, a statewide effort to build a proposal for increased local funding in the next biennial budget, which state legislators will begin discussing in July 2017.