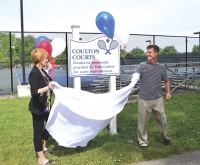 Bay Village Mayor Debbie Sutherland and members of her administration gathered at the Bradley Park tennis courts on May 31 to recognize the generosity of a former resident.

The City greatly appreciates Tom Coulton's donation of $10,000 per year for the next six years in order to maintain and improve the tennis court facilities in the city. Mr. Coulton is a 1981 graduate of Bay High School and is an accomplished international professional tennis player.

"I come back to Bay frequently and I utilize the courts," Coulton said. "I wanted to make a contribution to the city and I thought the tennis courts would be the place where I would want to start. I want to keep the courts in good shape and encourage many people to play the game. I’ve played it my whole life and it’s been a great thing for me."

In appreciation for his dedication to the city’s tennis programs, a sign was erected at Bradley Park showing the new name of the tennis courts to be Coulton Courts.

One of the first improvements the City is looking into will be shade structures over the bleachers to provide shade for spectators.