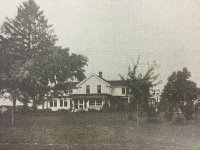 The former Cedarcrest Sanitarium on Detroit Road in Westlake was once the home of W.H. Becker, as pictured in "Beautiful Homes of Cleveland," published in 1917. The Atrium office building now sits on the site.

On a recent visit to the Special Collections area of the Main Branch of the Cleveland Public Library I re-acquainted myself with a book I had first discovered as a 14-year-old boy. It is called “Beautiful Homes of Cleveland” and was published by The Cleveland Topics Company in 1917. The focus of the book is a selection of substantial homes built within the city of Cleveland and inner ring of suburbs from about 1890 to 1915.

The book also includes one home in today’s Bay Village, the Lawrence Mansion, which is now part of Cashelmara, and one home in today’s Westlake. The home in Westlake is listed as the “Home of Mr. W.H. Becker, West Dover, Ohio.” It is odd that it is included in the book since it is not very architecturally noteworthy and in today’s terminology we would call it “re-muddled.” I was not initially familiar with the home and proceeded to do some research on it.

The home was listed on the Ohio Historic Inventory in 1977. It is described as a circa 1840 Greek Revival home, located at 30396 Detroit Road. If you are over 45 years old you may remember that it was located on the north side of a bend of Detroit Road between Crocker and Bradley Roads. It was replaced by the Atrium office building at 30400 Detroit Road just a year after its listing on the Ohio Historic Inventory. An interesting coincidence is that local architect Bob Corna designed both the Atrium office building and the Cashelmara condominiums.

The inventory form further describes it as “a simple clapboard house with prominent gable and a deep frieze” (characteristics of the Greek Revival). It goes on to say: “This house was greatly altered during the late 1890s. A large veranda running the length of the house was erected circa 1900 and later partially screened and filled in with siding, so that none of the Tuscan colonnade remains open. A large wing was erected to the rear and new mantle, doors, heating and lighting systems were installed circa 1910. The house was further altered circa 1920 with an elaborate wrought iron fence with concrete piers.” As for its history and significance the form states: “This property started as the 100 acre homestead of the Barnabus Hall family. In the 1890s it was divided and sold to W.H. Becker, president of the Valley Steamship Company, and Mr. C. Handy. It was Mr. Handy who owned the house when it was converted into the Ceaderhurst (sic) Sanitorium.” The form states: “The grounds contain many fine old trees that comprise a park-like setting which was the site of the first private tennis court in Westlake.”

It was either Ray Osborn or Sarah Crocker who owned the property in 1911 and sold it to William Becker. In 1920 William Becker and his wife Mary Becker split off a 3.72 acre lot with the house and sold it to Paul and Elizabeth Wiegert. They in turn sold the property to Chester and Grace Banks in 1923. A plat book in 1927 shows the property as Cedar Crest Sanitarium owned by G.C. Banks. In 1932 the Banks transferred the deed to Cedarcrest Sanitarium Incorporated.

Sanitariums were medical facilities for the long-term treatment of illness, most typically associated with treatment of tuberculosis (TB) before antibiotics. In the early 20th century, TB sanitariums became common in the United States. The rationale was that before antibiotics, a regimen of rest, fresh air and good nutrition offered the best chance for the TB sufferer’s immune system to fight off the disease. Patients were often wrapped in blankets and laid outside or on porches in special reclining chairs. The veranda with Tuscan colonnade in the fresh air of Dover would have been perfect for TB patients.

The 1930 U.S. Census for Dover Township lists 29 residents of Cedarcrest  Sanitarium – including 59-year-old Chester Banks as superintendent; his 55-year-old Canadian-born wife, Grace; and 27 “inmates” ranging in age from 29 to 78 with birthplaces from all around the world. Westlake’s 1963 guide plan lists Cedarcrest as one of four nursing homes at that time in the city. A 1976 directory lists Crestwood Nursing Home at 30396 Detroit Road.

Why does any of this matter? For one thing, it has affected the physical form of today’s Westlake. The 3.72-acre parcel that the Atrium office building sits on is the exact same parcel carved out by a steamship president in 1920 to hold an 1840 pioneer homestead on the bend of a former Indian trail. The location and form of Cedarwood Drive and Cedarwood condominiums were shaped by the size and location of this parcel. Most likely the name “Cedarwood” harkens back to Cedarcrest Sanitarium.

Next time you drive west on Detroit Road at Crocker Road, notice how the Atrium office building terminates the vista in its prominent location on the slight bend of the road and imagine how it looked when that vista framed an 1840 Greek Revival park-like estate.

William R. Krause, AICP I am the Assistant Planning Director for the City of Westlake. I have worked for Westlake for 27 years. I served on the Bay Village Planning Commission for 5 years. I was a member of the Reuben Osborn Learning Center Steering Committee. I am a Board Member and Historian for the Westlake Historical Society and a Trustee of the Western Reserve Architectural Historians. I have been married to Debra for 35 years and am the father of three grown children, grandfather of two and owner of two Shih Tzu's and a Rat Terrier mix.