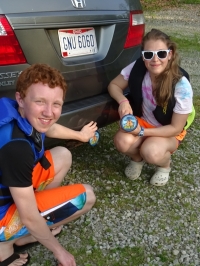 Derek Reid and Megan Olson with the “Wear It” trailer hitch covers being sold by the Bay Sea Scouts to promote life-jacket use. Photo by Richard Gash

In an effort to help promote safe boating, Sea Scout Ship 41 has partnered with the National Safe Boating Council to give away “Wear It” trailer hitch covers. The idea is two-fold. When the cover is removed it will remind the boaters to wear their life jackets and secondly as other drivers around town see the “Wear It” symbol it will remind them to wear their life jackets when they go on the water.

The Sea Scouts will be handing out the hitch covers on Tuesday evenings at Bay Boat Club, weather permitting, until the supply runs out. All that is asked is the completion of a short email survey at the end of the boating season to determine the effectiveness of the program.

According to Wikipedia, there were about 1.7 million cases of drowning worldwide in 2013. In the United States, it is the second leading cause of death (after motor vehicle crashes) in children 12 and younger. In addition to many non-fatal drowning injuries which can result in long-term disabilities, the Centers for Disease Control and Prevent reports that from 2005 to 2014 there were 332 deaths each year from drowning in boating related incidents. Whether you go sailing, motor boating, kayaking or even paddle boarding you should always have a life jacket. It is one of the most important things you should have with you.

The Sea Scouts are a co-ed youth group who seek adventure on the water whether it is sailing, paddling or motor boating. For more detailed information contact Richard Gash at 440-871-6106.