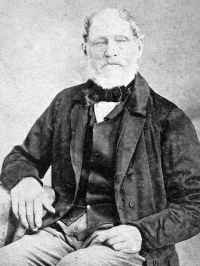 Who was Caleb Eddy Jr.? We can document that Caleb Eddy Jr. arrived on the east side of Cleveland about 1809 with his parents, Caleb Sr. and Nancy. We know that between 1819 and 1869, Caleb was in and out of Euclid and Dover Townships until his death in 1869. Because of this, his name is often omitted from our list of early settlers. But Caleb has an interesting story.

In 1826, we know he purchased 140 acres in Dover Township's Lot No. 83, on the east side of Bassett Road, one of the larger parcels in the township, for $1,500 from James and Dianthia Bryant. Osborn Road ran through his property. His neighbors were the Osborns, Sadlers, Cochron heirs, and Bassett/Hurst family with the southern boundary later becoming the railroad tracks. This parcel shows on an 1852 map of Dover Township. But let's go back in history two centuries to the Eddy family's arrival in America.

In 1630, Samuel, son of William Eddy, of Cranbrook, Kent, England, and his family sailed on the good ship, "Handmaid," landing at Plymouth, Massachusetts. The family settled around Swansea, Massachusetts. We know from the Cahoon Family History that the name Caleb Eddy, along with William Cahoon, are two of the 16 names listed on the Block Island registry as being the first owners of said island off the coast of Rhode Island. I have always thought these two families were connected and now I’m more convinced than ever.

Caleb Sr. and his wife, Nancy Mcllrah Jones, migrated from Pennsylvania, where Caleb Jr. was born on Sept. 25, 1791, to Euclid in 1809. The first mention we have of Caleb Sr. and Nancy Mcllrath Jones Eddy living in Connecticut’s Western Reserve tells us Caleb Sr. was operating a grist mill along Dugway Brook in 1809. From a deed owned by the Cleveland Heights Historical Society, we know that Caleb Eddy Sr. purchased a portion of Lot No. 7 in Euclid Township as his homestead in 1815. Interestingly enough, across from the Dugway Brook mill property was the Reynolds Cahoon meadows, owned by our Joseph Cahoon’s half brother. Their father, Reynolds, would come to Euclid Township to live with Reynolds.

Reynolds Cahoon Jr. purchased the Eddy homestead. Eventually, he owned all 160 acres of Lot No. 7 (now Cleveland Heights.) This confirms interaction between the families early on. Eddy Road, on the east side, is named for the Caleb Eddy Sr. family. Today, this is the land around Mayfield Road – Coventry Road shops and Mayfield Jewish Cemetery. Both of these properties overlapped what is today the land of Lake View Cemetery.

Caleb Eddy Jr. served in the War of 1812, receiving a land grant of 160 acres from the government for his service. There is no information about his service or the land grant.

Caleb and Rebecca Reynolds were married in Euclid Township in 1817. By August 1819, Caleb and Rebecca purchased 100 acres in Lot No. 8 of Cleveland Township, along St. Clair Road between East 109th and East 118th streets today. This land bordered Dugway Brook. All Caleb had to do was follow the brook south along Lake View Road and he would be at his parents' homestead. In 1819, while visiting friends (Cahoons?) in Dover Township, Rebecca gave birth to a daughter, Nancy. The next reference of the family has them living 16 miles southwest of Detroit, where a son, Caleb Reynolds Eddy, was born in August 1821. You might think Caleb had a case of wanderlust.

While living in Euclid Township, the Eddy family became acquainted with the Moses Hutchins family of Geauga Township who had a daughter, Margaret Mariella Smith. When Caleb came back to live in Dover Township, Margaret, a young girl, joined them on the farm. When Luman Griswold, of Geauga Township, asked for her hand in marriage, in 1826, Margaret accepted and lived in Geauga Township. Luman then settled his family on a farm in Avon Township. He died at the young age of 45 in 1849, leaving Margaret with a family of seven daughters and one son.

On Sept. 20, 1849, Caleb Eddy’s wife, Rebecca, died. Margaret, with only one son, Luman, to help, was struggling to keep the farm running. Five of her daughters had grown and married. Caleb asked Margaret and her remaining family of Rosina, Margaret and Luman to move in with him on Bassett Road. Margaret sold the Avon farm. Caleb and Margaret married Oct. 3, 1850, with Justice of the Peace, JR Jewett of Lorain County officiating. She was almost 20 years younger than Caleb. Caleb and Margaret enjoyed life together for 19 years, farming on the east side of Bassett Road.

On May 21, 1869, Caleb died of a fever. He was 77 years old. Margaret passed four days later of the same fever. The death certificates say heart disease, which the fever could have affected. We know that when the Waldeck family purchased the property, part of the Eddy house was still standing. Lehr Tuttle had it moved around the corner to 29506 Osborn Road. It sat in the middle of a grape vineyard. Today, it is recognized by the Bay Village Historical Society as a Century Home.

Could it be that the Cahoons and Eddys were friends? Could they have visited back and forth across the Cuyahoga River? We will never know for sure, as nothing was written down. But, I think they were friends and visited with each other. I believe this had something to do with the Eddys settling in Dover Township. What do you think?

I think Bay should have named a street after him.