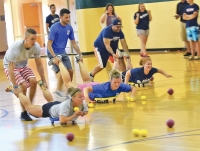 Teams scramble to collect balls in the human version of "Hungry, Hungry Hippo" in the Westlake Rec Center gym. Photo by Denny Wendell

The final event day culminated with the splash-filled cardboard boat races at the Westlake Recreation Center. For the boat competition, teams constructed a watercraft of cardboard that was judged on construction and design before navigating two lengths of the Westlake Rec pool. The race required a male and female paddler. Despite their best efforts, not all of the boats completed the race, as some took on water in the heat of battle.

At the end of this friendly and good-natured challenge, only one team could claim the title as the 2016 Westlake Corporate Challenge Champion. This year’s winner was the team from UH St. John Medical Center. During the awards ceremony, the winning team was presented with a champion plaque and the Corporate Cup, which stays with the winning company for the year.