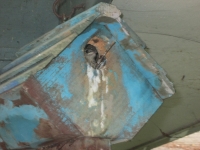 Our house wrens are gone, and we are bereft, anxiously scanning ours and the neighbors’ back yards for any sign of the family that won our hearts this summer. It’s hard to believe that my husband and I are nostalgic for a time when two very aggressive, territorial little birds barely larger than hummingbirds took over our yard, scolding us with their strident cries even when we walked past the windows inside our house. And yet we are.

Let me explain. I believe we were there when the moment of conception occurred, resulting in the little nest of cheeping baby house wrens. One evening in early July we sat in the back yard as the sun was setting and marveled as the two little birds chased each other incessantly, without rest for what seemed like hours. Suddenly the two birds, conjoined, fell to the ground. They’re dead, we thought.

But that was just the beginning. Soon the birds were busily flying in and out of the wooden bird house hanging under our eave, a wren house, as we later learned, which had been hanging there for at least seven or eight years without anyone using it. We didn’t even know the birds were wrens until we looked them up on the internet. We learned that the house wren's song is bubbly and melodic, that the birds are common to Ohio during mating season from May through July, and that they are notoriously aggressive and territorial, and will even kill to defend their territory. I watched one video in horror, as a house wren with its sharp little beak systematically picked up and threw baby bluebirds out of their nest one by one, presumably to get rid of any competition.

The scientific name for the house wren, Troglodytes Aedon, translates as “crevice or cave dwelling” and “infant killer,” after a Greek queen of Thebes who mistakenly killed her own son, while aiming for the son of a rival, and whose grief was lessened by Zeus, who turned her into a nightingale. So, we learned, we were hosting the cave dwelling infant killer in our back yard.

One thing we can tell you, apart from the scary name, the house wren is, as my husband quipped, the hardest working bird in show business. Those birds are never still from sun up to sun down. The male, we learned, builds multiple “dummy” nests to show the female during courtship, and the two work furiously to build up the chosen nest with a mass of twigs. It even appeared that the male was feeding the female while she sat on the eggs during the incubation period.

The birds were industrious and driven, but it wasn’t until we heard the faint cheeping sounds coming from the nest that the birds earned their reputation for ferocity.

They started warning us to stay away with a surprisingly loud, rapid clicking sound, not unlike the sound of a rattlesnake, which would modulate and become even fiercer if they felt threatened by our movements. Then they started dive-bombing us, at first forcing my husband to run inside because he wasn’t confident that they would refrain from pecking his eyes out. Fortunately, we learned that they would stop short of actual bodily assault. It was amazing to watch such a small bird fly straight at you at full speed, only to veer away at the last moment.

One night we watched as a barred owl showed up high in the trees and the blue jays began to scold. The two little house wrens flew right up join in the fray, scolding the owl and flying at it in fury.

The parents continued to work without rest for days, bringing insects to feed the little ones. About 10 days after we first noticed the cheeping, my husband had a first sighting of a baby bird looking out of the hole of the bird house. I was there too the next time we saw a small head. The baby was dark, unlike its parents, who are a kind of light greyish brown, but with the same distinctive looking sharp yellow beak. It looked out, calm but observant, for about two minutes while we watched.

And then they were gone. No more scolding, no more activity. The nest was silent and empty. The baby birds had fledged while we were away. A  couple of days after that we took down the bird house and peered inside, finally able to satisfy our curiosity about what it looked like inside. And there was a tiny, empty round nest inside made of twigs, with a couple of stray feathers stuck to it.

It’s been a few days since the birds left the nest. But we have sighted the parents nearby, still scolding us, so we think they are guarding over their little fledglings for a while until they are safe.