Green teams have many colors 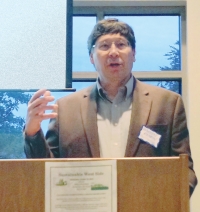 Warren Remein from the Bay Village Green Team talks about the group's initiatives during the Sustainable West Side forum on Oct. 26. Photo by Tara Wendell

Representatives from many west side sustainability groups discovered that they have as many differences as commonalities during an Oct. 26 gathering at Rocky River Unitarian Universalist Church. One local green team was formed because of a concern that pesticides were being sprayed on the grass in public parks where children play. Another was formed in response to Pope Francis’ plea for the earth and, on the feast of St. Francis, 50 attendees learned many simple ways to reduce their carbon footprints.

The focus and efforts of green teams and community environmental groups are indeed diverse, from an interest in educating their community on rain barrels and composting, to community gardening, to reducing energy usage by large companies. Speakers mentioned coloring contests among school children to heighten environmental awareness, planning for solar panels, and cleanup actions for area streams. Those present heard about composting ordinances, large tree protection and community supported agriculture.

All this diversity resulted in a wonderful amalgam of wisdom at the Oct. 26 Sustainable West Side forum. After community-based groups spoke there were presenters who provided a regional perspective and introduced useful tools.

Mike Foley, director of the newly formed Cuyahoga County Department of Sustainability spoke of two solar power initiatives they are working on. The county’s Sustainability Toolkit, sharing many way cities can “be green,” is now on their website.

Jessica Fenos of the Cuyahoga County Solid Waste District stressed the importance of keeping wastes out of expensive landfills, through disciplined recycling and composting. These “house by house” efforts can total major benefits. The new “what do I do with?” feature of the District's website helps residents with common recycling questions.

Cindy Cicigoi of Cleveland 2030 District raised our hopes with her impressive amount of energy conservation happening among nearly 200 building owners in Cleveland who have signed on to reduce energy usage, water usage and carbon dioxide emissions. The Cleveland 2030 District collaborative includes congenial competition and tracks these reductions. Cleveland was the second city to establish such a collaborative. There are now 15 cities involved.

From this meeting personal connections were made. Cleveland’s west side communities have a variety of groups to consult when they are planning new initiatives, and now these groups have each other to share ideas and offer support.