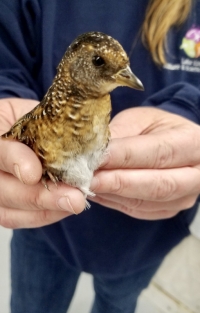 Although Yellow Rails often move through the Northeast Ohio area during migration, they are unlikely to be seen due to their extremely secretive behavior. As the second smallest rail in North America, the Yellow Rail breeds in sedge marshes and winters in both marshes and hay fields.

This particular bird was found near Industrial Parkway in Cleveland. The initial exam conducted by Lake Erie Nature & Science Center’s expert wildlife staff did not show any physical injuries, but the bird was weak and stressed – likely due to a long flight across the Great Lakes.

The team quickly gathered the necessary materials to mimic a Yellow Rail's preferred habitat in order to reduce its stress level and encourage the bird to eat on its own. Although the Rail did not eat the first night, its behavior improved and the Center's staff decided to release the Rail in an appropriate habitat where it can forage and continue its migration route.

"This is our first admittance of a Yellow Rail since I have been on staff," said Amy LeMonds, who joined the Center in 2005 and has served as Director of Wildlife since 2013. "We were quite pleased to relocate the Rail to a place where it can regain its strength for the rest of its long journey south."

Last year, Lake Erie Nature & Science Center admitted over 1,400 animals composed of 120 different species into its Kenneth A. Scott Wildlife Education & Rehabilitation Program. Its wildlife staff does everything in their power to care for the animals with the ultimate goal of one day releasing them back into the wild.

The Wildlife Rehabilitation Program at the Center is a free service to the public and is supported through generous donations from the public. If you would like to help support this program, please visit www.lensc.org/support.