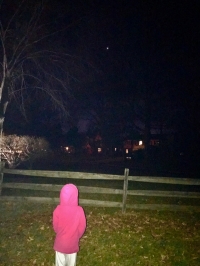 A young stargazer observes Venus in the night sky. Photo by Maggie Watson

Keep an eye out for visible planets in March and April’s evening skies with the help of Katy Accetta, astrophysicist at Lake Erie Nature & Science Center.

Mercury, the smallest and innermost planet in the Solar System, is never too far from the sun in our skies. Mercury orbits the sun in 88 days, the shortest orbital period in the solar system, and spends most of its time behind the sun, in front of the sun or right next to the sun. When Mercury’s position and the sunset coincide, it becomes possible for us to see the often-hidden planet. Now is the best time of the year for ambitious sky watchers to catch Mercury as the planet will be set low in the western sky now through April 1. An especially great evening to catch Mercury, Mars and a crescent moon all in the western sky is March 30, where Mercury will resemble a bright star next to the setting sun.

Jupiter is the largest planet in the solar system and is mostly composed of two elements: hydrogen and helium. The “gas giant” is fairly close to Earth, so it often appears bright in our evening sky. Jupiter will reach opposition on April 7. Opposition, or when a planet is at its nearest point to Earth and in its full phase, will allow Jupiter to receive maximum sunlight and shine extra bright in the evening sky. Look for Jupiter throughout early April in the east-southeast at dusk and west-southwest at dawn.

Some people may have heard the phrases “Morning Star” and “Evening Star,” but did you know that both nicknames are referencing the same planet, Venus? The densest of the four terrestrial planets is incredibly bright in our skies due to its proximity to Earth and the high reflectivity of its atmosphere. Often the first object people notice when visible in the sky, Venus orbits the sun faster than Earth and changes its position in our skies relatively quickly. Venus will return as our “Morning Star” by mid-April and, with binoculars, one can see its crescent shape this time of year. On April 30, Venus will be at its greatest illuminated extent in the morning sky.

To learn more about our solar system and all it inhabits, explore the many astronomy programs offered at Lake Erie Nature & Science Center. Open registration for Summer 2017 begins on March 20, where you can sign your children up for space camps, rocket camps and more! The Center also offers astronomy programs for all ages. Next up: Telescope Night (for all ages) on March 25 at 7:30 p.m. and Hitchhiker’s Guide to the Inner Planets (for adults) on March 29 at 10 a.m.