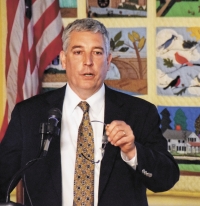 Bay Village Mayor Paul Koomar presents his State of the City address on May 31. Photo by Denny Wendell

Bay Village’s annual State of the City address had a different feel this year, with a new voice and new venue from years past.

In his first major presentation as mayor, Paul Koomar shared his perspective on the highlights of last year’s administration, helmed by former Mayor Deborah Sutherland and interim Mayor Gary Ebert. Mayor Koomar, who previously served as City Council president, took over on Jan. 1 to fill the remaining year of Sutherland’s term.

In a break from tradition, the May 31 address was presented not to members of the West Shore Chamber of Commerce, but to Bay residents gathered at the Dwyer Senior Center.

Mayor Koomar’s address spotlighted the achievements of the city’s departments in 2016, but the emphasis of the speech was on the future.

The city is regaining its financial foothold following the recession and loss of tax revenues from the state. Through reorganization, efficiency and a new budget model, the general reserve fund, which holds emergency funds and was depleted in 2010, has been replenished back to the 2009 level with two months of operating cash.

One example of the departmental efficiency Mayor Koomar cited is the My Senior Center program initiated by Community Services director Leslie Selig. The software tracks attendance, transportation and Meals on Wheels, allowing for a more tailored approach to serving seniors’ needs.

“For Leslie to have resources now of data on her programming, whether new or existing, and to monitor that and look for trends in usage will allow her to serve the seniors very well,” Koomar said.

The program is similar to the iWorQ software utilized by the service department to track service calls, work orders and equipment.

Mayor Koomar was encouraged by the statistics coming out of the city’s building department, which was privatized four years ago and is run by SAFEbuilt. There were 22 new residences built in 2016, valued at nearly $9 million, and more than 1,800 residential alterations, a sign that people are investing in the city.

“This shows a lot of interest in Bay Village, and because our housing stock is older, that reinvestment in the homes is critical to Bay’s future,” Koomar said.

On the commercial side, there were 38 non-residential alterations last year. Koomar discussed his efforts to work with business owners and the two major shopping plazas to keep storefronts looking fresh and occupied by businesses providing needed services.

“I want to be a good partner with those commercial owners, Koomar said. “I think that’s key to driving quality businesses to Bay Village and staying in Bay Village.”

The city welcomed Madison Eye Care to the Bay Square Shopping Center and Chernisky Residential Designs to East Oviatt Road. This summer, Vivid Jewelers will begin their relocation from the Bay Square plaza to the Burns Automotive location, a six-month process that includes a renovation of the auto garage.

Mayor Koomar discussed two other high-profile projects – a proposal for multi-family housing on the site of the former Shell station, and the relocation of the Bay Village branch library. Both items will be discussed in upcoming public meetings. Liberty Development will share their proposal for townhomes in a community meeting on Tuesday, June 13, at 7 p.m. in City Hall. The Cuyahoga County Public Library will host two public input sessions: on Wednesday, June 6, 6-7 p.m. at the Dwyer Center; and Wednesday, June 14, 6-7 p.m. at Bay Library.

One of Mayor Koomar’s priorities is to enhance access to the city’s parks for pedestrians and bicyclists, a theme echoed by residents involved in preparing the recently completed Bay Village master plan. A study started last year by the Northeast Ohio Areawide Coordinating Agency (NOACA) is wrapping up, and offers a vision for improving connectivity between Cahoon Park, Huntington Reservation and the lake.

With the scheduled replacement of the Lake Road bridge over Cahoon Creek in the next 18 months, Mayor Koomar shared a plan that has the Ohio Department of Transportation opening up access underneath for a 14-foot-wide walking path to the lakefront. There’s a point of land along the shore, across the creek from Bay Boat Club, that could be developed as a park.

“I think it would be uniquely Bay because it would be hard to get to, and it would be more for our residents,” Koomar said about plans to develop the land. “We’d like to make this sort of a Bay-centric place for sunsets and other activities.”

A path connecting the shoreline point and the walking trail, combined with the NOACA-proposed crosswalk from the walking trail to the soccer fields, would make for a continuous path throughout Cahoon Park.

“You get the sense of creating a loop, not just having one path but opportunities to move throughout our parks on bikes or walking or strollers ... to experience the land that the Cahoon family left for us.”

Another part of the NOACA plan is the re-striping of Lake Road as it passes through Cahoon Park. The number of lanes will be reduced to three, adding a bike lane on each side and extra space for pedestrians on the sidewalk. The change will also help to curb speeding traffic, as that stretch is the only place for miles along Lake Road to pass other drivers.

“It doesn’t seem in the middle of your park that that’s what you’d want and so we’re going to stripe it to three lanes, hopefully slow down traffic and provide better access to the walking trail and to the Metroparks for our residents.”

He has begun talks with the Cleveland Metroparks on partnering on trails connecting the beach and cultural venues at the west end of Huntington Reservation to the sports fields, pool and planned new library at the east end of Cahoon Park.

Five months into the job, Mayor Koomar appears to be building a vision for the direction he’d like to take Bay Village during his time in office. Continuing good practices from the previous administration, along with a fresh perspective and guidance from the new master plan and NOACA study will help chart the path.