Rehabilitated bald eagle soars back into the wild 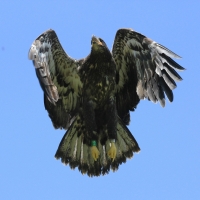 A bald eagle is released back into the wild after receiving care at Lake Erie Nature & Science Center. Photo by Jordan Ladikos

After less than two weeks in captive care, a juvenile male bald eagle is free again thanks to the wildlife staff at Lake Erie Nature & Science Center.

The Center has performed wildlife rehabilitation as a free service to the public since its inception in 1945. The highly trained staff admits, assesses and treats 1,400 animals a year and over 100 species with the ultimate goal of releasing them back into the wild.

“When I began my career in wildlife rehabilitation 13 years ago, eagle populations were low in the state of Ohio. Today, we admit at least 1-2 eagles a year in need of human assistance,” said Amy LeMonds, Director of Wildlife at the Center.

In late April, the Center received a call from a local water treatment facility where the eagle was found unable to fly after landing in a processed sewage bed. Wildlife specialist Taryn Leach was off-duty at the time but volunteered to safely capture the eagle and transport it to the Center where it could be examined by the wildlife rehabilitation team.

“After our initial assessment, I was relieved to find the eagle in overall decent shape. However, human assistance was necessary in order to clean his feathers and remove the heavy sewage disabling the bird’s flight,” said LeMonds.

LeMonds and her team gradually washed the sewage off the eagle’s tail and wings throughout its treatment at the Center. The eagle’s treatment plan also included IV fluids, preventative antibiotics and tube-feeding to provide nourishment. Once he was self-feeding, the bird was transferred to a larger enclosure where his flight and movements could be observed by staff.

After significant signs of improvement, the eagle was banded for identification purposes and ready for life back in the wild. He was released in Huntington Reservation on May 9 among a small crowd of staff and other admirers.

“It’s thrilling to see a bird soar away after we poured our hearts and souls into its rehabilitation. There is no other feeling like it,” described Leach.

This summer, the Center will be offering a variety of educational programs on wildlife rehabilitation including Wildlife Rehabilitator Investigation Camp, where students ages 12-15 can explore the natural history of animals, their dietary needs, common injuries, treatment options and more. To learn more about the Center’s summer camps and family programs, visit www.lensc.org.