Zen and the art of backpacking 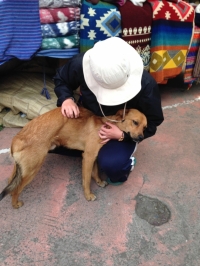 For our five-week trip to Quito, Ecuador, the kids, ages 18 and 15, and I competed for the lightest backpack. At 20 pounds and two ounces, mine weighed the most; the girl’s, at just under 16 pounds, the lightest.

Quito, at 9,000 feet above sea level, sits in the foothills of an active volcano in the Andes. We had volunteered to work in a kindergarten for the indigent. Every morning, we took a bus and stopped in front of two huge dumpsters, spilling over with rotted vegetables, reeking of urine and fermented fruits. The street led into a huge municipal market. To the right of the entrance was the kindergarten, four big sunny rooms that were disinfectant clean.

My kids loved the one-year-olds. They didn’t mind changing diapers, spoon-feeding, and chasing babies who crawled, walked, got up and fell down like a scene from a zombie movie but with really cute zombies. After my last child, I’m very done with diapers. I stayed with the 3-year-olds.

At a first glance, I estimated a quarter of the twenty-some kids had crusted or runny noses. The right eye of one girl was completely bloodshot from an infection. The young matron explained they kept sick children because the parents had to work. And the children were guaranteed two good meals in school.

The first child I fell in love with, of course, was the little girl with the raging conjunctivitis. She watched my every move and listened attentively when I labored in my high-school Spanish. (Si, Senora Babcock; 40 years later, I still remember quite a bit.) She showed me her Lego creations. I sat her on my lap, cheek to cheek, and made up silly names for them.

In days, I watched the redness spread to her other eye, and I couldn’t stop hugging her or the others. We all got sick.

My kids didn’t complain. Friends back home asked why we took such tough “vacations.”  I wanted to say: Because we can. When everything you need is contained in a 20-pound backpack, life is easy.

The last week, we decided on a last-minute trip to the Amazon. As we raced to Quitumbe, Quito’s largest bus terminal, to catch an all-night bus my daughter suddenly stopped, squealing with delight. She found a big, yellow stray dog resting between two bushes.

“Wait, wait, let me feed it.” She dug furiously in her backpack for the bag of dog food that she’d been hauling around. I looked at the front gate of bus terminal and swallowed a loud groan when something caught my eye.

Despite all this commotion, this dog didn’t move. Its jaw bone jutted oddly; its eyes glistened but didn't blink. Its head rested on the concrete in a large wet halo, which had an eerie silver shimmer.

It was lying in a pool of drool.

“Don’t move,” I said sharply to my daughter. “This dog is rabid.”

There we stood – my daughter still hugging her bag of dog food – and watched transfixed as a hard life fought to cling on.

At that moment, nothing mattered.