A look back at Captain Penny's time in Westlake, Bay Village 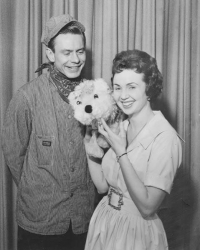 Like many younger baby boomers I have fond memories of children’s syndicated television personalities Captain Kangaroo and Mr. Green Jeans, Shari Lewis and Lamb Chop and others. Closer to home, broadcasting from the WEWS-TV studio were pretty Miss Barbara and her Magic Mirror and handsome, likable Captain Penny and Bobo the Clown. Miss Barbara had a typical bouffant hair style of the day and Captain Penny was dressed in railroad engineer attire. Miss Barbara, Norwalk native Barbara R. (Bowen) Plummer, died in 2010 at 80 years old, still a Cleveland area resident.

Captain Penny, Elyria native Ronald A. Penfound, unfortunately died at the young age of 47. While on screen he presented a wholesome, clean-cut image, off screen, like many young men of his era, he had been a cigarette smoker and succumbed to lung cancer in 1974. I was intrigued by a recent article about Captain Penny, which stated that he resided in Westlake during his TV days. The Captain Penny show ran from 1955 to 1971 so I was curious as to where he lived.

What I found was that he purchased 2464 Elmwood Drive in the Forest Lake Subdivision of Westlake on Jan. 27, 1963 with his second wife, Phyllis J. Yoder Hunter. I was surprised to see that he sold it, as a widower, just four years later on March 6, 1967. After doing some digging I was astounded to learn that, tragically, Phyllis committed suicide by jumping off an Ohio Turnpike bridge which crosses the Cuyahoga River in Summit County, on Mother’s Day in 1964.

A front page story in the Plain Dealer on May 11, 1964, was headlined “Capt. Penny’s Wife Leaps to Her Death.” The story explains that she told Ron she was going for a drive at 9 a.m. and he told her that he would watch their two children until she got back. A motorist told officers he saw a woman dressed in blue slacks and a blue yachting jacket walking slowly in the westbound roadway on the bridge at noon. Police reported that she jumped from the northeast end of the bridge. A Mother’s Day card was found in her new 1964 Corvette sports car parked west of the bridge.

Both Ron and Phyllis had been married previously. He had a daughter with his first wife, and she had three sons with her first husband. The newspaper article stated that these three sons resided with their father in Middleburg Heights and that Summit County sheriff deputies reported that she had been under the care of a psychiatrist. The anguish of this tragic event leapt from the page. Her funeral services were held at Jenkins Funeral Chapel, in Westlake.

Captain Penny had originally planned on becoming an Episcopal priest when he attended Kenyon College before he switched to broadcasting as a career. He had the warm, upbeat, calm personality of a pastor, much like Mr. Rogers, the more famous children’s television personality who was an ordained minister. It is hard to imagine how Captain Penny coped with the loss and two young children to raise; perhaps it was his faith?

He continued to close his show by telling his young audience: “You can fool some of the people all of the time, and all of the people some of the time, but you can’t fool mom. She’s pretty nice and she’s pretty smart.” A side note is that my own mom was offended by his closing statement. I guess she figured she was really nice and really smart. As an innocent young viewer, there was no discernable difference between Captain Penny before and after his tragic loss.

Ron did cope and move on; he sold the house on Elmwood on March 6, 1967 and married Jo Ann Dudas on May 20, 1967. They purchased a gambrel-roofed home on Lake Erie at 26712 Lake Road in Bay Village on July 10, 1968. According to a deed recorded at the County, the mortgage was $36,000. Ron and Jo Ann had two children together. It seems like whether he was at work or home there were children! The Captain Penny show continued until its last broadcast on Sept. 4, 1971. From 1969 to 1972 Ron was also the public address announcer for the Cleveland Indians.

Ron left Cleveland in 1972 for a sales manager and sportscaster job in New Hampshire and they sold the Lake Road home in September of that year. The gentleman who purchased their home owned it for 35 years until 2007 when it was sold for $425,000. It was razed in 2017 for construction of a new home, though the original home is still viewable on Google.

The Captain Penny show included cartoons, “Little Rascals” and “Three Stooges” shorts, and live features including “Pooch Parade” where he showed dogs available for adoption from the APL. Guests on the show included Mr. Jingeling during the Christmas season (played by Earl Keyes who produced the show) and Jungle Larry who brought snakes and exotic animals on the show. Ron served as best man for “Jungle Larry” (Lawrence Tetzlaff ) when he married “Safari Jane” (Nancy Berens) in 1957. It was his long friendship with Lawrence Tetzlaff that took him to Naples, Florida, in 1973 where Larry and Nancy had a winter home. It was in Naples that Ron died of cancer in 1974.

Jungle Larry died in 1984 and his widow and sons are seeking photos and memories to include in a book they are writing about him. The photos can be submitted  to photo@junglelarry.com the stories to story@junglelarry.com. Along a similar line, Lysa Stanton of the Westlake Historical Society is collecting photos and stories for a book about Captain Penny at campmudpuddle@yahoo.com.