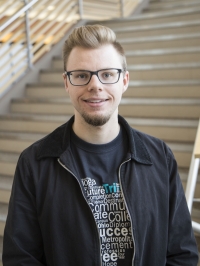 Nate Bevington tried college for a year after graduating from Keystone High School in Lorain County. The experience left him underwhelmed, uninspired and in debt, so he opted against continuing.

“I thought I was done with school,” Bevington said. “It just wasn’t my thing. To be honest, I didn’t see the value in college.”

A year at Cuyahoga Community College rekindled Bevington’s academic drive and led to a cap-and-gown moment on the commencement stage. He earned an Associate of Arts degree from Tri-C in December.

Bevington said that his sister convinced him to enroll at Tri-C to build a career path to a better future. He had spent the previous few years working a series of odd jobs at fast food joints and factories.

Professors, tutors and counselors at Tri-C’s Westshore Campus in Westlake worked with Bevington to ease his return to the classroom. Within weeks, he said that the campus felt like home.

He quickly immersed himself in day-to-day life at Westshore, working as a student assistant and becoming involved with student government. He also participated in various activities with campus clubs.

“Being involved on campus really helped me open up to more people and try different things,” Bevington said. “It has been the full college experience. I know I’m ready for what’s next.”

Bevington said he plans to take a few more classes at Tri-C in the spring before possibly transferring to Cleveland State University to pursue a bachelor’s degree in organizational leadership.

He’ll serve as president of Westshore Student Government during his final semester on campus.