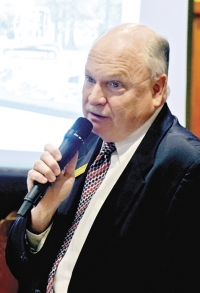 Westlake Mayor Dennis Clough gave his 33rd annual State of the City address to members of the business community at the March 13 West Shore Chamber of Commerce luncheon. The annual presentation highlights the work of the city’s departments over the previous year, offers a snapshot of the city’s finances and provides a look at upcoming projects.

Westlake’s healthy budget and strong, diverse tax base allow the city to provide a high level of service and many community improvements. Business incentives entice large companies to locate and remain in Westlake.

“We do pride ourselves on the relationship we have developed with the business community,” Clough said. “To tell you that the city of Westlake continues to grow is often an understatement.”

Thirty-six businesses opened, expanded or relocated within Westlake during 2017, totaling more than 156,000 square feet of retail space and 65,000 square feet of industrial space. Commercial and residential construction combined generated a total investment in the city of more than $100 million over the last year.

The Engineering Department will follow up a busy 2017 with a number of projects in 2018. After replacing the Bradley Road water line between Hilliard and Detroit, the focus now shifts to water line improvements on Rose Road and Clark Parkway. The Center Ridge/Canterbury intersection roadwork has been completed and a new turning lane and traffic signal will be installed at the new elementary school on Center Ridge.

“The Engineering Department is proud of what they do every year. I have to say that they manage to get many projects done that other cities can’t possibly do, with the kind of staff that we have.

Among the most talked about plans are the new senior/community center and Clague Park aquatics center. Both projects were approved by voters last November with the passage of the tax renewal levy. Mayor Clough said that the city will sell bonds to help finance the construction. The aquatics center upgrades are expected to be completed by May 2019; construction of the community center, which will be located near the recreation center tennis courts, is estimated to wrap up in September 2020.

A new citywide phone system was installed, replacing 225 phones and upgrading all telephone circuits, at a cost of $240,000. Clough expects to recoup that investment over six years with an annual cost savings of $40,000.

In other words, the general fund balance per resident has grown to $1,097 from just $48 in 1986, and the amount of debt carried by the city is $197 per resident, down from $658. These figures are what lead Clough, a certified public accountant, to proclaim every year that Westlake is “virtually debt free.”

Slides and a video from the State of the City presentation are available on the city’s website, www.cityofwestlake.org.