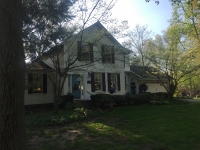 This circa 1854 home on Dover Center Road once belonged to James D. Hurst and his wife, Lydia. Photo by William Krause

Hurst has been a fairly common name in Dover which makes it difficult to research. It has been hard to determine if they represent one or multiple families who settled in the geographic area that now encompasses Bay Village, Westlake and Avon.

Multiple sources state that three or four brothers named Hurst emigrated directly from England to Dover Township and Avon in the early 19th century to take up sheep farming. Both Josiah and Thomas Hurst’s homes are featured in an 1874 atlas of Cuyahoga County. Thomas Hurst’s circa 1838 brick home, which still exists on the north side of Detroit Road, west of Bradley, is marked with an Ohio Historical Marker. Josiah N. Hurst’s home was located west of Thomas’s home and while the house is gone, one of his barns pictured in the 1874 drawing still exists, painted white, at 31450 Detroit Road.

Their brother William Hurst’s home is still located further west on the south side of Detroit Road in Avon. William Hurst’s circa 1843 home has been described as one of the finest stone houses in the Western Reserve and was known as Stone Eagle Farm due to the stone eagle sculpture that perched on its parapet.

Whether the home featured in this story is connected to the same Hurst family is still unclear. What we do know, based on U.S. Census records, is that in 1880 there was an 11-year-old boy named James D. Hurst, who had been born in Ohio, living alone with his 60-year-old father named Fred in Avon. Both Fred and the boy’s mother were born in England. Fred could be the fourth brother of Thomas, William and Josiah.

If the home on Dover Center Road was constructed in 1854 then it was obviously not constructed by THIS James D. Hurst since he was not born until 1868 and until the Cuyahoga County Archives re-open this fall we cannot determine for sure who constructed the home. But deeds and death records prove conclusively that a James D. Hurst who was born in 1868 and died in 1959 once owned this home.

Based on pictures that are part of the Westlake Historical Society’s collection, what we do know about James D. Hurst is that he and his wife Lydia A. Beardsley Hurst owned a general store at the northwest corner of Dover Center and Center Ridge roads as early as 1895, when he was 26. It burned down in 1909.

U.S. Census records have James and Lydia living in Dover in 1900. His occupation is listed as a merchant and his parents are both listed as having been born in England. In 1900 they have a 5-year-old son, Leland, and a 4-year-old son, Russell. Her mother, Teresa Beardsley, shares their home. By 1910 they are living on Dover Center Road and his occupation is listed as fruit farmer (the store had burned down the previous year) and they now have a third child, a daughter named Lucile.

They continued to live on Dover Center Road during the 1920 and 1930 census. A good friend of mine who grew up in Westlake during the 1950s remembers the elderly Mr. Hurst selling tomatoes in the front yard of 2004 Dover Center Road. After James and Lydia's deaths in 1959 the home was sold. It was purchased in 1963 by William M. Buttris.

A brochure prepared by the Westlake Historical Society for the U.S. Bicentennial in 1976 featured the “old Hurst Home.” It states that the private home had been modernized inside, but has kept its antique charm.

The current owners have continued to both modernize and keep the charm of this exceptional property.